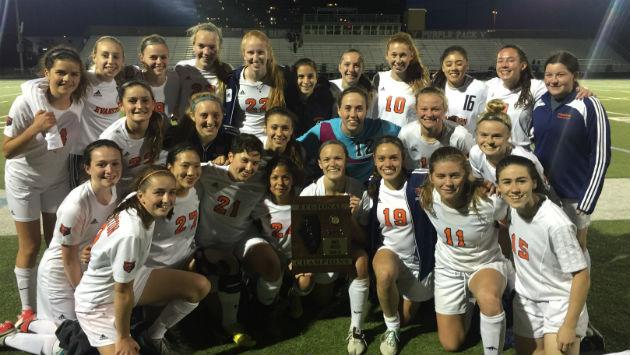 Any nutritionist would cringe to learn what Caitlyn Dalton had for a pre-game meal  prior to the regional championship soccer game at Niles North Friday night.

But considering the results, maybe a 12-inch pizza and some cheese fries are a winning combination even if it’s not that healthy.

Dalton delivered 3 goals — only the 2nd hat trick of her career — as the Wildkit girls buried Niles West 6-0 and earned their third straight regional championship under head coach Maurizio Grillo. The victory boosted Evanston to 19-3-3 on the year and set up a sectional semifinal showdown with Loyola Academy next Tuesday at 6:30 p.m. at Maine South.

“It tastes good and it works for me,” said Dalton regarding her diet. What works for Dalton — a shift to forward this year after she spent most of her high school career on a defensive wing — has also worked well for the Wildkits. She’s emerged as one of the team’s leading scorers, with a knack for finishing that seems to come naturally for the senior standout.

You couldn’t accuse Dalton of not being hungry to keep the season alive. She feasted on the Niles West defense for a pair of goals in the first half, and then added a breakaway goal in the 56th minute to break the game open.

Teammates Maia Cella, Keara Kerr and Meg Rogan also connected for the winners, who defeated the Wolves for the second time this season.

When Grillo approached her about moving to forward, he didn’t exactly have to twist her arm. “I really like playing forward, and I really like scoring goals, obviously. Who doesn’t?” Dalton asked. “I had played every position except goalie during the club season, so it really wasn’t that big an adjustment. I just wanted to do what was best for the team.

“I looked at the players we lost, the players we had coming back and I was fine with it. I’ve always been able to score, even last year when I played defense. I had 7 or 8 goals because I’m pretty good in the air on corner kicks. It’s nice at forward, because there’s not quite as much pressure on you there. If you mess up, the other team doesn’t score right away.”

“Her speed was always in the back of my head,” said Grillo regarding his options before the season started.  I knew Avery (Ackman) and Ruby (Siegel) would be solid on defense coming up to the varsity. We had to re-educate Caitlyn some about finishing plays, but she’s an intelligent player and she really picked it up quickly.

“She’s always composed out there. She’s the smartest ‘lazy’ player I’ve ever coached. I say ‘lazy’ because she’s not going all-out all the time, but she knows when to make her runs and her timing is always great. She’s really good at reading defenses.”

Dalton’s first goal was set up on a perfect pass from Cella. Cella started the scoring thrust from midfield and finally slid a pass to Dalton, who  buried the shot into the left corner of the net past West goalkeeper Medina Skenderi.

That goal came in the 29th minute, and 6 minutes after that Dalton found the back of the net again, heading the ball home after a direct kick by Alex Berkley.
Goalie Sheridan Cleave stopped the only serious Niles West attempt with 4 minutes left in the first half. Nichole Lopatin’s free kick from the 15-yard line, a bullet, was knocked away by a diving Cleave and she also cut off an attempt on the ensuing corner kick by the Wolves.