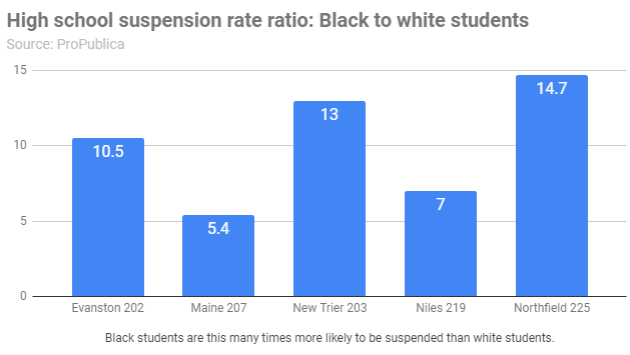 A new database from the non-profit news site ProPublica offers a wide range of information on racial disparities in the performance of school systems nationwide.

Using the data today we were able to compare the disparity in suspension rates for black versus white students at Evanston Township High School and four neighboring suburban districts.

The results show ETHS in the middle of the group — with a lower ratio of suspension disparities than high schools in New Trier and Northfield townships, but higher ratios that high schools in Maine and Niles townships.

You can investigate the ProPublica database here. The information is drawn mostly from the Civil Rights Data Collection administered by the U.S. Department of Education’s Office for Civil Rights. Its latest data covers the 2015-16 school year.

ProPublica today took an in-depth look at the schools in Charlottesville, Virginia, which the report says, bears similarities to other college towns like Evanston or Berkeley, California. (The ProPublica story on Charlottesville also appeared today in the New York Times.)

Coincidentally, the local news site Berkeleyside today published a story marking the 50th anniversary of the integration of elementary schools in Berkeley, a decision made about the same time in Evanston.