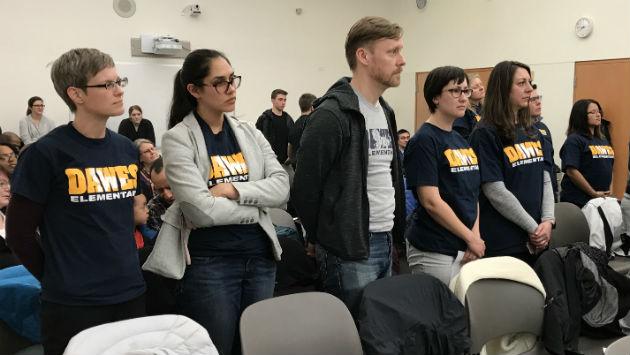 Supported by at least a dozen parents wearing Dawes t-shirts, PTA co-presidents Laurie Haverkamp and Shannon Lang cited injuries to students and a teacher’s assistant, loss of instructional time, constant distraction and even classroom evacuation because of the behavior of “students with extreme social and emotional trauma.”

Dawes parent Jeanine Brownell used the image of the Keystone Cops to describe the way things got done at the school, an analogy she said she heard from LaTarsha Green, the Dawes principal last year. “She didn’t mean to be critical of the teachers and staff at Dawes,” Brownell said, “but she recognized that the lack of support systems and structures put them into a state of reacting to crisis after crisis.”

Parents attribute the problems at the school to high turnover among principals. “The lack of consistent leadership at Dawes has taken its toll on our beloved community, our teachers, our families and our students,” said Haverkamp. “We will be on our fifth principal in five years.”

“We are grateful for Ms. Perisin, our interim principal. We believe wholeheartedly that Dawes teachers are the best in the district,” said Haverkamp.

But the school “has seen an increase in in students with intense behavioral challenges that require additional strategies and supports to meet their needs and maintain safety for all students and staff,” Haverkamp said.

Brownell said that her son “struggles with impulsive behaviors that can be distracting in the classroom. He often gets sent to the principal’s office,” she said. Two weeks ago she got a call at 2 p.m. that her son was sent out of class for disruptive behavior and, since the principal was out of the building for the afternoon at a district meeting, her son spent 90 minutes in the nurse’s office with nothing to do and no one to help him problem solve and return to class.

“For all Dawes students to continue to thrive and our teachers and community to feel supported,” Lang said, the PTA is advocating for an assistant principal, more teacher’s assistants, more personnel that are trained in crisis prevention and an additional social worker.

Lang also asked that district leadership be more transparent and communicative. “I myself have had emails and phone calls go completely unanswered and ignored by leadership,” she said. “And I am not the only one. This is unacceptable.”

Asked before the board meeting about leadership at Dawes, Superintendent Paul Goren confirmed that there have been four leaders in the past four years and said that the average tenure of a principal in the district is 5.1 years.

“While it would seem as though there has been higher than average turnover at Dawes,” Goren said, “two of those leaders were brought in to serve in a temporary capacity while principal searches were conducted. The decision to have interim leadership was made based on the timing of departures and proximity to the new school year.”

He also said that LaTarsha Green, the most recent principal, is now serving the district as the executive director for black student success.

“I recognize the impact that change can have on a school community. Yet I believe it is important to have a thorough and transparent hiring process to ensure that both the candidate and the school community feel it’s the right fit in both the short and long term. We intend to hire an outstanding candidate who will commit to staying at Dawes for an extended period of time,” he said.

“I take you at your word that you are committed to equity in this district,” said Brownell in speaking to the board. “So I ask that you look at the need, not the numbers. Dawes has a TWI program and three self-contained special education classrooms, 30 percent of students are English Language Learners and a majority of families qualify for free or reduced lunch.”

“We may be a relatively small school by our numbers,” she said. “But the need is large. Please give Dawes the leaders and staffing we need and deserve.”