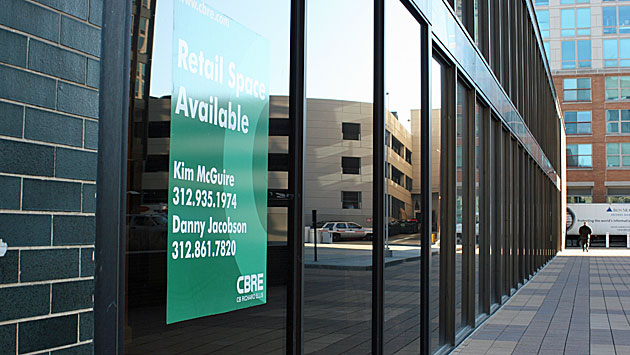 The long-vacant building at 1629 Orrington Ave., once the site of a Borders bookstore, may soon be home to a day care center for more than 300 children.

Evanston's Zoning Board of Appeals is scheduled to review plans for the center, which requires City Council approval as a special use, during a meeting at 7:30 p.m. Tuesday at the Civic Center.

The facility would be operated by Bright Horizons, a Massachusetts-based company that describes itself as the world's leading provider of employer-sponsored child care, early education and work/life solutions, with over 700 programs in the U.S., Canada and Europe.

Bright Horizons currently operates 34 centers in the Chicago area, including the NorthShore University HealthSystem Child Development Center at 1000 Central St. in Evanston, which cares for 84 children.

Company officials say they have a commitment from Northwestern University to sponsor 60 spaces in the new center. 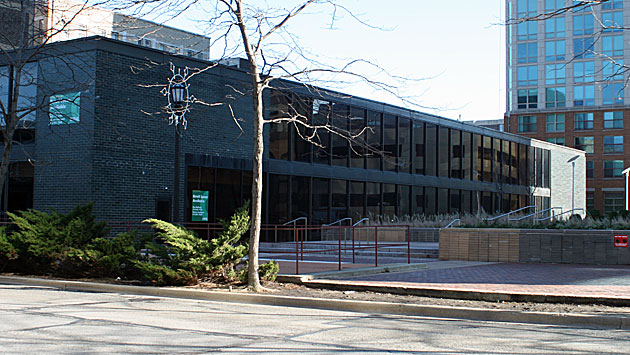 Top and above: Views of the 1629 Orrington Ave. building today.

The company's proposal, as presented last month to the city's Site Plan and Appearance Review Committee, calls for operating programs for infants and toddlers in the rear of the first floor of the building and programs for three- and four-year-olds on the entire second floor.

The front of the first floor of the building is not part of Bright Horizon's plan. It may be separately developed later for a restaurant or other retail use.

The plans call for having a 7,000-square-foot playground on the roof of the building with an 8-foot tall security barrier around it as well as a  ground-level play area with a 6-foot fence. A new elevator and stairs would provide access to the roof-top playground.

The area between the 1629 Orrington building and the 1603 Orrington tower has recently been redesigned to provide a surface parking lot accessible from the alley behind the buildings.

The company says the new center would provide 58 new full- and part-time jobs and that it provides a full benefit packages to its employees.

Day care facilities downtown have proved controversial in the past, with aldermen late last year initially rejecting a proposal for an adult day care facility in storefronts at 524-526 Davis St., only to approve it on an 8-1 vote at their next meeting.

The would-be developer later withdrew from that project, and the space is now being converted to an Asian restaurant called Todoroki, which signs say is scheduled to open soon.

Borders moved to a newer location in the Church Street Plaza development about a decade ago before filing for bankruptcy and closing that store earlier this year.