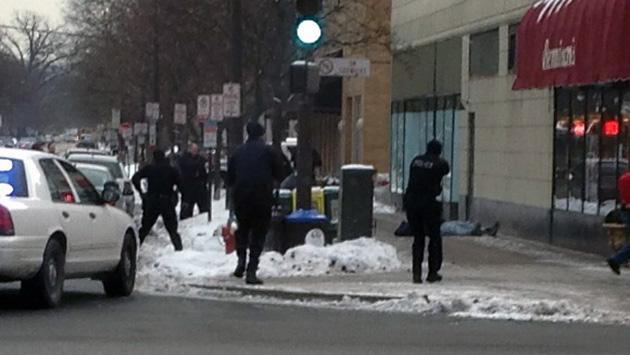 Update: 2:05 p.m.: Evanston police now have identified the bank robber shot and killed in a confrontation with officers on a downtown street Monday as 29-year-old Kevin Ross of Evanston..

Evanston police say they're continuing to work with the FBI to determine if Ross was involved in any other criminal activity in the Chicagoland area.

The BanditTracker.com website, operated by the FBI, other police agencies and local banks, says he's also suspected of robbing a TCF Bank branch at 4355 N. Sheridan in Chicago last Thursday.

Police so far have not confirmed any link between Monday's robber and the man who held up the same Chase Bank branch at 901 Grove St. last September. That robber is believed to be the same man who hit a different TCF Bank branch, at 5343 N. Broadway in Chicago, twice — on Oct. 2 and Dec. 5.

Update 12/20/13: The FBI now has concluded that Ross was responsible for all five robberies — the two at the Evanston Chase branch and three at the two TCF branches in Chicago.

Evanston police say video from a squad car camera confirms witness reports that the robber pulled out a gun when confronted by officers on Maple Avenue about a block from the bank and refused their orders to drop it before he was shot.

Police recovered a 9mm handgun and $3,000 in proceeds from the bank robbery from Ross, who was taken to Evanston Hospital where he was pronounced dead.

A previous fatal shooting incident involving Evanston police, a 2009 incident in which officers shot a knife-wielding man in the basement of a building near Church and Dodge led to a finding by state police that the shooting was justified.

The city also won a wrongful death suit last year that had been brought by relatives of the man killed in that incident.