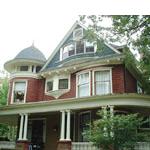 The deadline for submitting nominations for Evanston's 2013 Preservation and Design awards is Tuesday, April 30.

The annual awards program was established in 1983 by the Evanston Preservation Commission and the Preservation League of Evanston.

It recognizes notable achievements in restoration, rehabilitation, maintenance, and adaptive reuse of Evanston structures that have been completed between 2008 and 2012 in the following five categories:

Sensitive Addition/Alteration, for a project that successfully integrates an addition or alternation within the architectural style of a main house or building and complements the context and character of a historic district, neighborhood, or specific area.

Adaptive Reuse, for a project that creatively achieves the reuse of an existing structure originally used for another purpose.

Appropriate New Construction, for a new house, building, or structure that, through its design and use of building materials, enhances the quality of the built environment.

Proper Rehabilitation/Restoration, for a project that has closely followed the Secretary of the Interior's Standards for the Treatment of Historic Properties and its Guidelines for Preserving, Rehabilitating, Restoring, and Reconstructing Buildings.

Life Achievement/Preservationist of the Year, a new award this year to be given to an individual who has demonstrated a sustained commitment to the preservation movement for the benefit of the city of Evanston through his/her work or volunteerism.

Information and nomination forms are available on the city's website.