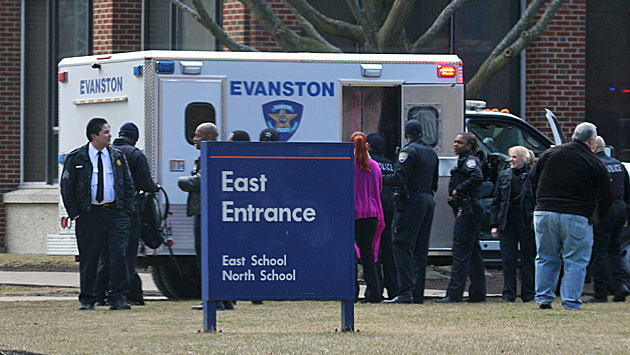 The nationwide debate about whether police officers should work in school buildings made it to Evanston this morning, with some citizens questioning the practice, but with the ETHS administration vigorously defending it — at least the way it’s done here.

Superintendent Eric Witherspoon told the District 202 Board of Education that the two school resource officers assigned to Evanston Township High School “do not in any way bring systemic racism into the school and are an amazing asset.”

Witherspoon said if there was any indication the officers were promoting such racism “they’d be gone in one second.”

The issue of police in school has grown as part of protests following the Minneapolis death of George Floyd in police custody.

Eight letters were read into the school board record during this morning’s virtual meeting. Seven called for removing officers from the high school. One letter, from the Moran Center for Youth Advocacy, spelled out a series of concerns. The Center was not against the two ETHS officers as individuals, the letter said, but rather that the presence of uniformed and armed police in school can lead to “systemic harm” for students.

School board member Gretchen Livingston said while the issue is “hugely important,” the remaining emails she received seemed like form letters, all with the same language. “If you’re a student, teacher, or parent, don’t just tell me to get rid of school resource officers,” Livingston said. “Tell me what interactions you had” which were negative, she said.

Superintendent Witherspoon said the school resource officers made only one arrest at ETHS last year.

Witherspoon said while the police are in school to protect students and staff, they also have countless positive interactions with young people. Unlike in some other schools, Witherspoon said, ETHS officers do not patrol the hallways, telling students to do this or that. Rather, they are there just in case something happens, as well as to work with children.

“The Evanston Police Department sends us the right kind of people,” he said.

With more than 4,500 people at ETHS in a given day, Witherspoon said, “We are a small city and we have issues like other cities.” Witherspoon said the ETHS officers “know the culture” at the school, and interact well with students, even helping to teach a class about public safety as a career.

Plus, the superintendent said, if there is a problem, teachers and students know the officers who will respond first. “I’d rather know who is here than call 9-1-1 and take our chances,” Witherspoon said.

Witherspoon who is white, and Assistant Superintendent Marcus Campbell who is Black, with two school-aged children, sounded a similar theme.

Campbell stated that problems with police officers in other school districts “came out the zero tolerance model of the 1990s,” and led to “overpolicing” in schools. Campbell said “we get it” at ETHS, and “kids don’t need to be criminalized.” He added that the school recently hired two social workers to help students with emotional problems.

Board member Jude Laude said the question is larger than the two officers at ETHS. Rather, he said, “the mere presence of an officer in a school can subconsciously impact children who don’t feel comfortable about the police.” Laude said as a Black man in his mid-50s, “when a squad car drives behind me subconsciously it impacts me.”

The Board took no action on the issue. Based on board members’ comments, there does not appear to be support to remove school resource officers from the District.

The two ETHS officers are in the Evanston Police Department budget, not the school system’s. Board Vice-Chair Monique Parsons said it’s good that the board is having “courageous conversation about racial justice. Just defunding the police does not do it for me,” she said.