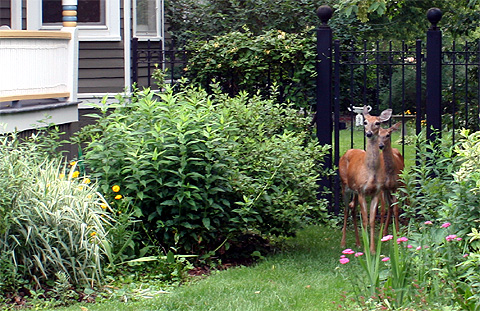 Two deer paid a visit to a yard at 1719 Hinman Ave. in Evanston about 7:30 Saturday morning.

There’ve been reports in the past couple years of deer seen crossing McCormick Boulevard near the Ladd Arboretum, spotted on the Peter Jans golf course along the canal banks in north Evanston and wandering through yards in northwest Evanston.

But this may be the first time in recent years that deer have been seen so close to downtown and the lakefront.

“I watched the deer in the yard for 20 or 30 minutes,” he said, “They browsed for a while and then laid down in the yard and finally wandered back through the yard of the Singhs next door.”

He said the larger deer seemed to have some fur missing from its neck and a scab on its head, which made him somewhat concerned about its condition. 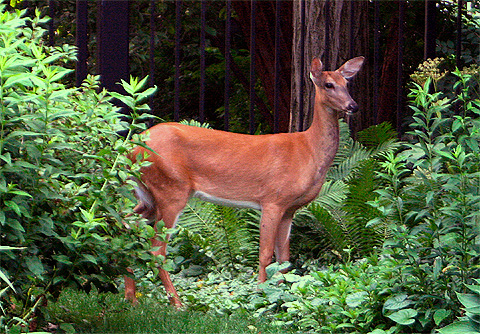 “The larger deer seemed to stand watch while the smaller one settled down, then they both laid down for a while before moving off between the houses,” he added.

Ms. Singh said that when the deer laid down “one faced east and the other faced west. I started to think they might stay in the yard all day.”

“They’re terribly attractive animals,” Ms. Singh said, “but when they started eating our flowers, my husband went out. He didn’t have to chase them, because they wandered off after they saw him,” she said.

“It was amazing to see them lying down, with their bodies sort of spread out. They looked much bigger than I would have thought,” Ms. Singh added.

Have you seen deer in Evanston? Login and post your comments below.