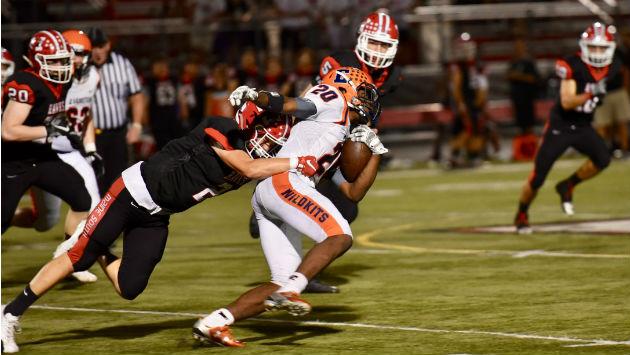 The temperature was still in the 90s for Friday night’s kickoff for the Central Suburban League South division football opener between Maine South and Evanston in Park Ridge.

And it was the defending state champions who kept turning up the heat, demolishing the Wildkits 56-14 and dominating every phase of the game.

How hot were the Hawks? They only punted once in the entire contest, scored on 6 of 7 possessions in the first half, and rolled up a total of 257 yards rushing and 195 passing. All Evanston (3-2 overall, 0-1 CSL South) could counter with was a pair of touchdown passes from Drew Dawkins to Mike Axelrood covering 9 and 7 yards.

Maine South (4-1) may not repeat as Illinois High School Association Class 8A state champions again this fall, but the Wildkits couldn’t stop them Friday night.

Senior quarterback John O’Sullivan, who was a backup last year, threw 3 touchdown passes and the Hawks added 5 more on the ground, including a pair by star running back Fotis Kokosioulis covering 9 and 7 yards. 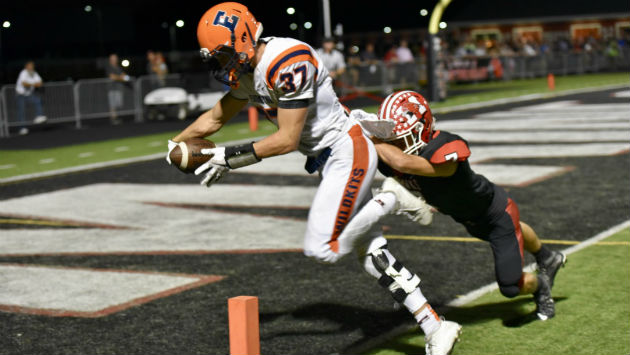 Mike Axelrood (37) focuses on the pylon and beats the Maine South defense to the end zone for Evanston’s first score in a 56-14 defeat.

“We didn’t play close to our best football tonight, and that’s what’s discouraging,” admitted Evanston head coach Mike Burzawa. “It was just bad football on our part, across the board. We had miscues on offense, errors on special teams and we couldn’t get a stop on defense. We got out-coached and we got out-played — it’s as simple as that.

“Just like in the Palatine game, we couldn’t get their offense off the field and you have to give Maine South credit for converting on third and fourth down against us. We got down 21-0 in the first quarter, and you can’t put yourself in that kind of a hole against a team as good as Maine South.”

Maine South delivered an early knockout punch, scoring 3 touchdowns in the first 8 minutes on a 9-yard run by Kokosioulis, a 20-yard burst by Paul Sasso, and a 24-yard toss from O’Sullivan to a wide open Cam Stacy.

Evanston regrouped long enough to march 65 yards to paydirt in 7 plays, with a pinpoint pass from Dawkins to Axelrood at the goal line accounting for the 9-yard score.

But that was as close as the Wildkits got. Evanston did put together another TD drive in the second quarter following a fumble recovery by Collin Olla-Chatman at the ETHS 35. Axelrood’s toe dance just inbounds after the reception resulted in a 7-yard scoring play, and marked the 6th touchdown catch for the junior standout in the past 4 games.

Dawkins completed 16-of-29 passes for 148 yards and one interception, while also losing a fumble. Leading rusher for the Wildkits was Quadre Nicholson with 40 yards on 14 attempts.

The Wildkits host rival New Trier next Thursday at 7:30 p.m. at Lazier Field.