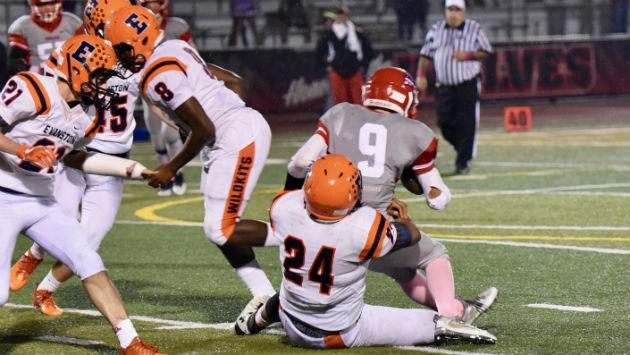 A combination of penalties and poor field position on a wet and windy night kept the Wildkits from getting untracked against the winless Wolves.

But it didn’t matter, because Evanston’s defense — which has been pushed around on occasion this season — refused to budge.

Defensive tackle Collin Olla-Chatman returned a fumble 49 yards for a touchdown for the first score of the game, and quarterback Drew Dawkins threw a pair of touchdown passes to Mike Axelrood in the second half of a soggy 30-0 triumph for the Wildkits.

Evanston earned its first conference win of the season and improved to 4-3 overall, snapping a two-game losing string in the process. Led by Olla-Chatman (7 solo tackles, 2 assists) and linebacker Nate Romero, the visitors limited West (0-7) to 91 yards rushing and 48 passing. The defense was also credited with a safety when West quarterback Corbin Repique recovered a bad snap in his own end zone, one of 9 fumbles for the Wolves.

“It was tough to bounce back from an emotional game last week (against New Trier), and we didn’t execute as well as we could have,” said Evanston head coach Mike Burzawa. “But we got some gifts on those turnovers. Field position dictated a lot of what happened tonight, and we were not able to get into a rhythm until the second half. 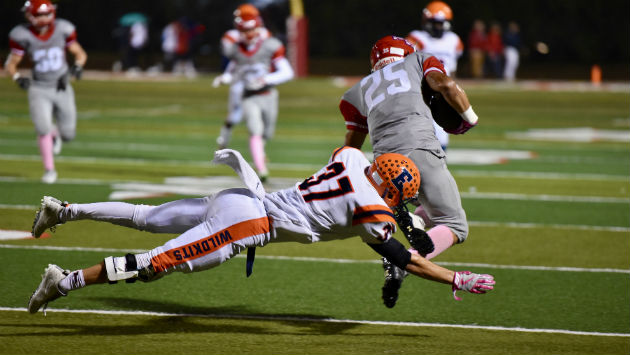 “The coaches have been working a lot with Collin (Olla-Chatman) on his technique and he was in the right spot for us a lot tonight. We expect big things from him the rest of the year.”

Niles West seemed poised to set off some Homecoming fireworks early, despite the loss of starting quarterback Will Shemroske with an injury on the opening drive of the game. Repique continued the march to midfield, but coughed up a fumble to Olla-Chatman, who rumbled 49 yards to paydirt.

Evanston added another score on a 15-yard burst by Malik Ross with 1 minute, 26 seconds left in the first quarter to up the advantage to 14-0. The Wildkits lost the services of sophomore running back Quadre Nicholson with an ankle injury in the first quarter and his status is unknown for next week’s Homecoming game versus Glenbrook South.

Dawkins drove the Wildkits 88 yards in 9 plays in the third quarter, completing 3-of-5 passes for 65 of those yards and scrambling for 20 more. Axelrood out-jumped a Niles West defender in the end zone and snatched the TD pass, the play covering 15 yards, with 5:59 left in the third period.

Three straight errant snaps from center on West’s next possession led to the safety, with tackle Troy Gallimore chasing Repique out of the end zone. After the Wolves punted from their own 20, ETHS put together a clinching drive of 70 yards, including an 8-yard scoring toss from Dawkins to Axelrood.

Dawkins rushed for 55 yards on 6 carries and completed 7-of-13 passes for 92 yards to lead the winners. The Wildkits totaled 210 yards rushing as a team.