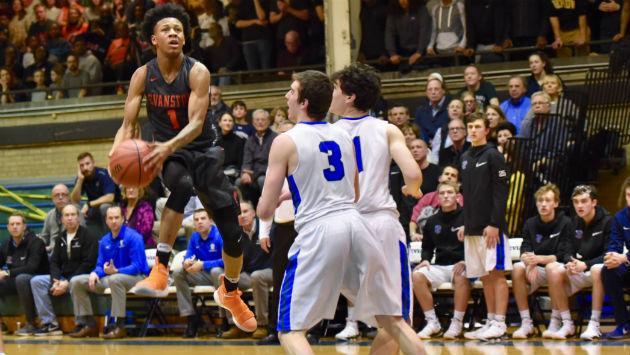 Jones didn’t have time. There was still another defensive stop to be made.

Jones’ blocked shot at the end of regulation saved Evanston’s bid for a big road victory in front of a packed house at Gates’ Gymnasium in Winnetka, and the junior guard scored 3 crucial points in overtime as the Wildkits edged New Trier 50-49 in a Central Suburban League South division showdown.

Evanston (13-3 overall, 4-1 league play) survived a 3-point miss by New Trier’s Andrew Kirkpatrick on the final play of the overtime and handed the Trevians (10-3 overall) their first conference loss. It marked the ninth straight victory for ETHS in the head-to- head rivalry that began in 1913, the longest winning string for either side since the Kits won 9 in a row from 1956 to 1960.

Evanston leads the all-time series 114-94 and simply had to find a way to win on a night where the visitors missed 16 of their first 18 field goal attempts, then mustered only 3 points in the entire fourth quarter.

Jones’ block of what could have been a game-winning layup by Griffin Ryan at the fourth quarter buzzer showed the defensive commitment that ETHS head coach Mike Ellis has preached from the day he took over the program. 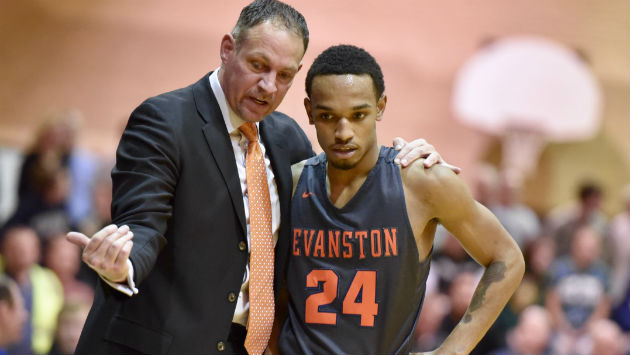 “Lance’s athleticism was on display there, but that play had to do with heart more than skill,” said Ellis.

“He didn’t give up on the play and that showed his will to win. We made so many plays with second effort tonight, and making those multiple efforts is something that we’ve had to learn as a team.

“We were tougher than New Trier was in the second half. In those late situations (fourth quarter and overtime) I told them we’ve got to get more stops, and that’s a testament to their willingness to play defense. The key for us tonight was definitely our defense. To hold a team like that with so much size
and so many weapons under 50 points was really big.”

Both teams staggered to the finish line and the only reason Evanston was still able to keep playing was because the hosts only scored 6 points themselves in the final quarter. Six-foot- 9 Ciaran Brayboy (game-high 16 points) sank a pair of free throws with 26 seconds remaining to create a 45-45 deadlock, and that’s where the score stayed after Peters’ miss and Jones’ smothering of Ryan at the other end.

“Once Blake missed, I realized that I only had 4 seconds to get down and get a stop at the other end,” said Jones, who finished with 15 points, 8 rebounds, 6 steals and 4 assists for the winners. “I didn’t want it to end like their game with Niles North (Trevian tip-in at the buzzer).

“I was really exhausted in the fourth quarter. It’s very challenging to play against that kind of size and length for so long. We just had to play smart in the fourth quarter. Right now I feel like we’re the best team in the conference, but we’ve got much more room for improvement. We’re just getting started.” 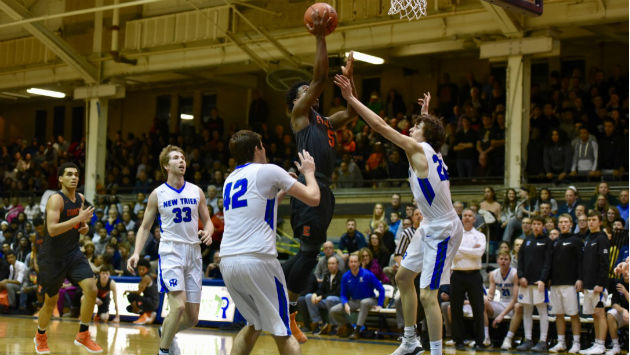 Lance Jones (5) of Evanston soars over the New Trier defense for a layup.

Jones converted 1-of- 2 free throw chances with 1 minute, 27 seconds left in the OT for a 50-47 Evanston advantage, and the Kits had to survive 4 turnovers after that to hang on. A traveling violation gave the Trevs a chance for the win, but instead of opting for an out-of- bounds lob to the 6-9 Brayboy with 3.5 seconds on the clock, they chose to feed Kirkpatrick and the 3-point attempt fell short.

Brayboy netted 11 points in the first half, but determined defense from a player a half a foot shorter — ETHS senior Reggie Henley — – kept him from doing more damage against an Evanston team that always had four guards on the floor against him and 6-8 Spencer Boehm.

“They were using Brayboy on ball screens, and we put Reggie in there to take them out of what they wanted to do. We needed to put him in there as a blade in the blender instead of letting them put us on the chopping board. Reggie was the blade spinning in the blender.

“We were just chucking up shots in the first half and then we came out and scored 20 points in that third quarter. I think tonight showed we can play at different paces. Top to bottom, the talent in this league is unbelievable and there’s a great coach on every bench, so you really have to be prepared to win a game like this.”

Jaheim Holden added 12 points for ETHS, 10 of them coming in the third quarter comeback from a 31-22 deficit. New Trier shot just 6-of- 27 from the field over the last 20 minutes, as Kirkpatrick and Boehm each scored 11 points to back up Brayboy’s 16.