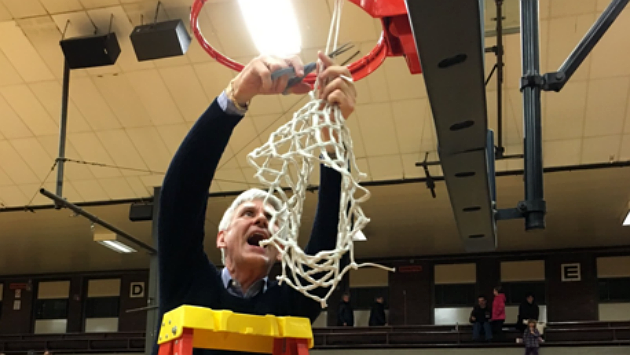 When Maine West freshman standout Rachel Kent rallied her team to within six points of No. 2 sectional seed Evanston Friday night at Beardsley Gym, that only meant one thing. It was Miller time for the host Wildkits.

Junior guard Brianna Miller applied the defensive clamps on Kent in the last period and the Wildkit girls limited the Warriors to just three points in the final 7 minutes, claiming their fourth straight Illinois High School Association regional championship by a margin of 46-35.

The victory keeps Evanston’s season alive at 23-5 overall and sends the Kits to a semifinal matchup at the Class 4A New Trier Sectional tournament against No. 3 seed Trinity next Tuesday at 7:30 p.m.

After a blazing start on offense, Evanston cooled down and had to rely on one of the best defenses in the state of Illinois.

Back-to-back 15-foot jumpers by Kent (22 points) pulled the Warriors within 38-32 early in the final period. That’s when the hosts stopped switching on defense and Miller remained glued to the 5-foot-9 freshman.

Maine West (21-8) had no Plan B to fall back on and Kent’s 3-point play with 48 seconds left was the only time the Warriors added to their point total after that.

Leighah-Amori Wool scored a game-high 23 points for the winners, including all 8 ETHS points in the fourth quarter. Wool connected on 8-of-13 field goal attempts and no other Evanston player notched more than 6 points.

“That was torture. It was really a struggle for us tonight,” admitted a relieved Evanston coach, Elliot Whitefield, while his players cut down the nets. “That No. 15 (Kent) is one helluva player, but I thought Brianna played some awesome defense against her in the fourth quarter.

“We have spots when we look good offensively as a team, like in the (22-point) first quarter. But defense is what we do best. I called a timeout when they cut it to six and I said to them that defense will take us as far as we want to go.”

Miller took that message to heart.

“We didn’t switch against their screens at that point. I just tried to stay up on her and sure she couldn’t get any open looks in the paint,” Miller said.

“When Whitey (Whitefield) puts me on the other team’s main scorer or point guard, that pushes me and I get an exciting feeling. I was pretty shaken up when they got that close, but I knew we’d get it back with our defense.”

Evanston broke out to a big first quarter lead for the second game in a row, pouring in 22 points as Wool and Cookie Boothe combined to shoot 6-of-10 from the floor in the period. But Boothe, Wool and Leah Robinson all went to the bench with a pair of personal fouls in that quarter and the Wildkits never really did get back on track offensively after that.

Six turnovers in the third quarter kept the Warriors within reach.

“I think that early foul trouble took our aggressiveness away,” Whitefield noted. “And I think we started clock-watching a little too much, too. We had to be a little more aggressive, and when we really needed a basket, Leighah got good position and we got the ball to her. And our defense really shut down Maine West’s other four players.”