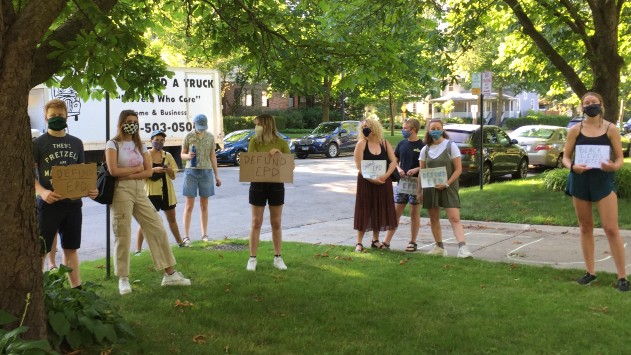 A dozen protesters gathered in front of the home of First Ward Alderman Judy Fiske demanding that she agree to a proposal to defund the Evanston Police Department.

The protest was sponsored by Evanston Fight for Black Lives. Ward organizer Jennifer Karlovitz said “I would like to live in a community where we don’t need police, although that won’t happen tomorrow.”

The defund movement has called for reallocating some of the police budget to housing, recreation, and education programs which would benefit minority communities.

There have also been calls to have police school resource officers removed from Evanston Township High School and from Evanston/Skokie District 65 schools.

Protest organizers said they planned to hold sit-ins at 5:30 this evening outside the homes of the seven aldermen who have not indicated they support the defund the police group’s demands.

At that time several aldermen were involved in virtual City Council committee meetings that they were attending from their homes.