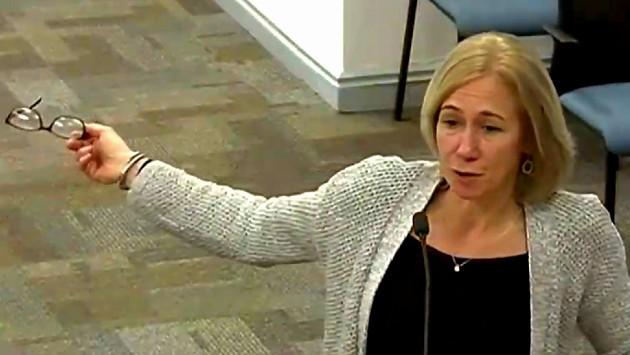 A woman who inherited a decaying one-story home on Judson Avenue from her aunt who died three years ago will have to wait at least until February to learn whether Evanston’s Preservation Commission will let her demolish it to replace it with a new two-story home and coach house.

Maria Nanos says her Aunt Stella had made essentially no improvements to the property for the six decades she lived there, and that it needed to be replaced to become a home for herself and her partner of 20 years, Lynn Briskin, who are both long-time Evanston residents.

At Tuesday’s meeting, commissioners appeared to be persuaded that the home at 548 Judson Ave. is in poor enough shape to be a potential candidate for demolition — with rotten studs in bearing walls, warped sill plates and crumbling brick foundations, among other issues.

But they balked at what they saw as a relative lack of detail in architect Chris Turley’s plans for the new structure.

A photo with a rendering of the proposed replacement house added.

The existing house is in the middle of three modestly-scaled homes on 33-foot wide lots. Other properties on this block in the Lake Shore Historic District are mostly larger homes on 50-foot wide lots.

The block also has two homes on 100-foot double lots and, at the north end of the block, a large apartment building .

Photos provided to the commission by Turley of some of the other properties on the block.

Amy Zann, who owns the Italianate-style house on the double lot at 540 Judson Ave., opposed the demolition.

“We’d welcome new neighbors who freshen up existing houses,” Zann said. But she said she didn’t want to have Evanston “become like Wilmette” where older homes are torn down and replaced with large, boxy ones.

Geraldine Shapiro, the owner of 546 Judson Ave., in an email to the commission, also opposed the project, saying it would “undermine the architectural integrity” of the trio of small houses and claiming that “no houses on the block have ever been demolished.”

She also said the proposed new home would be “a greatly out-of-scale, out-of-character structure that would dwarf the two adjacent structures.”

A rendering of the proposed replacement structures — house and coach house.

Turley, the project architect, argued that the existing building could not be brought up to current code and functionality standards and be even remotely economically viable.

The new structure would actually be narrower than the existing one, he said, and, while it is taller, it has nearly the same footprint.

Preservation Commission Chair Mark Simon said, “To seriously consider the new structure, I think the presentation will have to be fleshed out a great deal.”

“But I don’t want to send the applicant back to provie all the additional information if we’re opposed to demolition. That would be a waste of time,” Simon added.

Vice-chair Ken Itle said, “Because of the bad condition of the house, I’m open to demolition. But I have major concerns about the new design proposal.”

Commissioner Suzi Reinhold said, “I don’t think demoliton is the big question, but we have major reservations about the new design.”

Commissioner Elliott Dudnik said that while the proposed new structure was within the 35-foot height limit for the zoning district, most other homes on the block appear to be much more horizontal, while “this one reads as a very narrow, tall building.”

And he said the architect should “make a much stronger effort to fit the building within the zoning requirements” for building lot coverage and impervious surface.

The commissioners proposed continuing the hearing until its January meeting, but Turley said he would be out of the country on that date, so the decision was made to continue it until the panel’s February meeting.