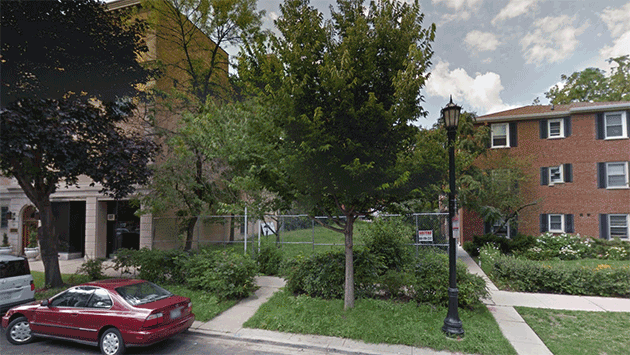 A long-vacant property at 910 Hinman Ave. may finally see new construction soon, after a redesign of the proposed building to answer complaints from neighbors.

The previous building on the site, a ramshackle house converted to apartments, had been torn down late last decade after a long series of disputes with the city over building code violations.

The building that used to occupy the site.

After acquiring the property in 2010 for $375,000, the current owner, Esskay III Series LLC, initially proposed a seven-unit, five-story development for the site.

Revised plans, for a four-story building with seven units, were submitted earlier this year, but withdrawn after neighbors objected.

The neighbors didn't want the new building to use an easement its owners had at the southwest corner of the site for access to parking for the new building, claiming it would create too much congestion with the adjacent property that also uses the easement for access. 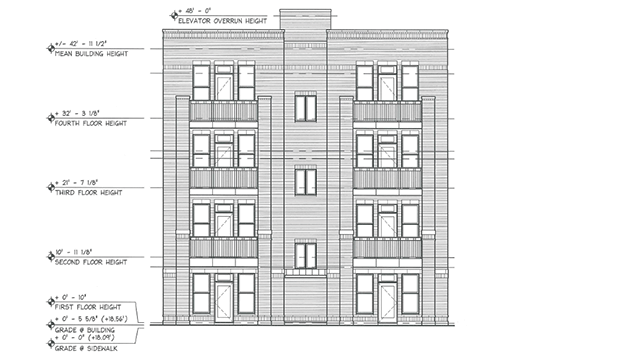 A rendering of the proposed new building.

The new plan doesn't make use of the easement, but requires zoning variations for lot coverage, impervious surface area, side and rear yard setbacks and parking.

City staff and the Zoning Board of Appeals have recommended approval of the plan, which is scheduled for action by the City Council Monday night.

In a memo to aldermen, Community Development Director Mark Muenzer said the proposed building "is similar, if not smaller, in comparison to the surrounding multifamily buildings in the neighborhood."