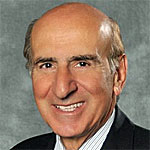 Yohanan, a DePaul alumnus, leads the $750 million publicly held bank holding company that provides retail and commercial banking services specializing in serving middle-market companies and not-for-profit corporations. He also has served two terms as a director of The Federal Reserve Bank of Chicago.

"Mr. Yohanan is a great addition to our Financial Executive Hall of Fame and a wonderful role model for our students," said Ali Fatemi, chair of DePaul's Finance Department. "He personifies success, integrity and honor. His tremendous achievements in the hard-to-navigate environment of banking are a tribute to his unsurpassed standards of moral and ethical conduct."

In accepting the award, Yohanan said he was proud to have been chosen by the institution that gave him his start. "DePaul not only prepared me well academically, but it helped engender in me the personal qualities of hard work, inquisitiveness, leadership and integrity that are so vital in the business world."