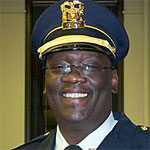 Evanston Deputy Police Chief Demitrous Cook wraps up a 26-year career on the force this week, and starts a new one as police chief of south suburban Glenwood, not far from the Altgeld Gardens public housing project where he grew up.

As a youth Cook was selected by the Upward Bound program, leading to his graduation from Southern Illinois University.

He was hired by Northwestern University’s Public Safety Department in January 1983, and in October 1984 he started his career as an Evanston police officer.

As a patrolman, Cook quickly distinguished himself and was transferred to the Crime Prevention Bureau, where he was one of Evanston’s first foot patrol officers and was acknowledged as crime prevention officer of the year, carefully cultivating citizen relationships to establish trust in the community.

Between 1988 and 1995 Cook worked in the gang crimes bureau and the neighborhood enforcement team.

Cook has received over 70 citizen letters of appreciation, 11 certificates of recognition, seven honorable mentions and five department commendation. He was also recognized as officer of the year by the Veterans of Foreign Wars.