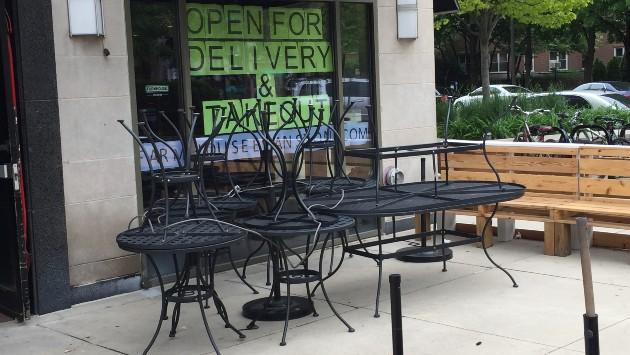 Evanston’s Design and Project Review Committee this afternoon turned down or delayed six of the eight requests it reviewed for sidewalk cafes.

Last week, a city development official told about 50 restaurant owners on a web call the city wanted to support them and would even waive permit fees for sidewalk cafes this year.

But most of the restaurant owners will have to modify the plans they submitted and go through another DAPR review meeting before they can start putting out the place setting for al fresco dining.

Under Gov. J.B. Pritzker’s Restore Illinois plan, restaurants can now serve food outdoors, in addition to having pickup and delivery. Dining rooms remain closed. But there are outdoor restrictions, which was the problem for applicants today.

Some of the restaurants have had sidewalk cafes before. But now, due to coronavirus, the tables have to be six feet apart. DAPR member analyzed the size of those tables, proximity to doors, trees, and the street. Restaurants whose applications were denied or continued can present more information, so there is still a chance their cafes will open. But not tonight.

Other Evanston businesses are reopening gradually. Under the current “Phase 3” plan, retail stores may re-open, with restrictions such as the number of customers allowed in.

Accents Plus, a women’s clothing store at Chicago and Davis, opened for the first time since March 14. Owner Virginia Escalante says her store was feeling the pinch even before the governor’s stay at home order.

Her business was down 51 per cent the first two weeks in March. People stayed home even if they didn’t have to, as news of coronavirus started to spread along with the disease.

Candy Lee, a Northwestern professor, was the first Accents Plus customer when the store re-opened this morning. Lee came Day One because, she says, “I want to support Evanston.” Customers are by appointment now. Then back to normal, or quasi-normal, next week. No more than 4 customers at a time, due to the store’s size.

This may have been Day One for reopening, but it’s the 35th anniversary for Accents Plus.  Virginia Escalante is worried about making it to Year 36.  Her business filed for Federal government assistance.  She says she never heard back, and there’s a sign on her window pointing that out.  “WITHOUT AID,” it proclaims.

Escalante says she was “pretty depressed at the beginning of this all.  I didn’t know if we would survive or not.”

There is a 3,000 person customer base, and Escalante says she’s gotten lots of calls. “There seems to be interest” among those customers in returning. But she hopes stores like hers are not forgotten. “With the struggle, there’s a lot of talk about restaurants, but little about the small retailer.”

“We are all living,” Escalante says, “in a very uncertain world.”