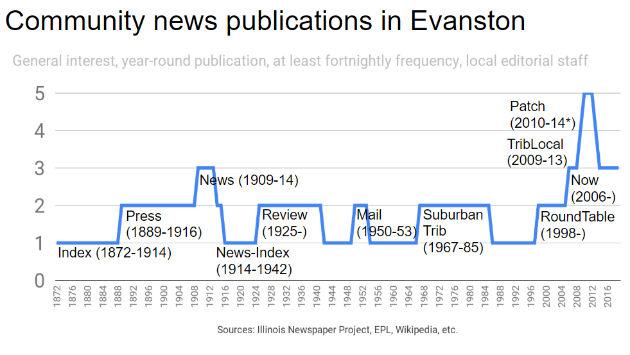 Despite what you may have heard about an increase in local “news deserts” — towns without any publications covering community news — that’s not the case here in Evanston.

But that doesn’t mean there aren’t challenges on the news scene here — and leaders of three Evanston-based publications will be talking about those challenges next Wednesday, April 3, at 6 p.m. at the Evanston Public Library on a panel organized by the Evanston League of Women Voters.

As shown in the chart above, Evanston has had at least one local news publication — and usually more than one — for nearly 150 years.

The chart includes only general interest publications that publish at least fortnightly on a year-round basis. That excludes several publications publishing monthly or less frequently, targeting special interest groups within the community or on campus or that don’t publish consistently year-round.

Nationwide the news business has suffered a dramatic loss of jobs — with a 26 percent decline in reporting jobs between 2004 and 2017.

And a University of North Carolina report issued last year, The Expanding News Deserts, said newspaper circulation in Illinois has fallen 34 percent since 2004 and 71 of 573 papers in the state closed or merged — with most of the losses affecting suburban weeklies.

However, the report noted the launch of 20 online news organizations in Illinois during that period.

The crisis in local news has largely been caused by a shift of advertising revenue to new digital platforms that have huge scale but don’t produce news content — especially not at the local level.

That leaves relatively little digital revenue to be shared among the entire rest of the online publishing universe.

Despite that, a new national survey by the Pew Research Center finds 71 percent of U.S. adults think their local news media are doing well financially.

An increasing number of publications are responding to the difficult advertising climate by seeking more direct support from readers in the form of subscription revenue or membership donations.

But Pew reports that so far only 14 percent of Americans say they have directly paid for a local news source in the past year.

I’ll be on next Wednesday’s panel along with Mary Helt Gavin, publisher and manager of the Evanston RoundTable, and Alan Perez, editor-in-chief of the Daily Northwestern. Helen Gagel will be the moderator. Hope to see you there. You can be sure of getting a seat for the free session by registering online.