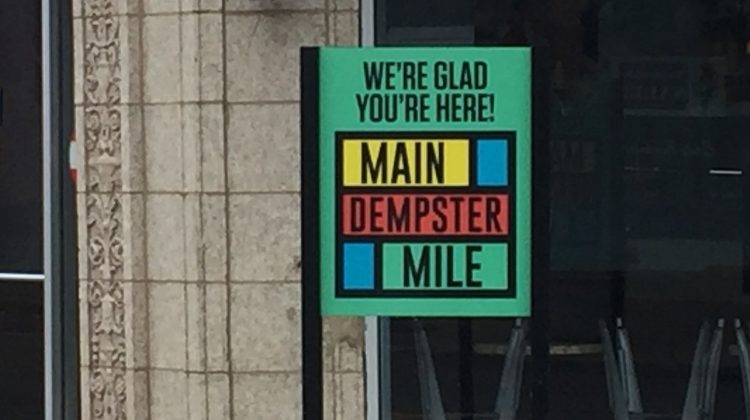 Lower rents than downtown. Smaller shops that are easier to fill. And local entrepreneurs willing to take a chance during a pandemic and a nationwide economic disaster.

Those are among the reasons two of Evanston’s neighborhood business districts, the Main-Dempster Mile, and Central Street, have attracted about the same number of new businesses in the time of COVID-19 as have closed.

Katherine Gotsick, director of the Main-Dempster marketing organization, says ten businesses have closed since mid-March, but ten others have opened. In the Central Street district, marketing group director Laura Brown lists about half a dozen closings, but a similar number of openings along Central.

One of the new Main-Dempster stores, Masterpiece Framing and Imaging, went into the old Good’s location on Main Street. Masterpiece owner Matt Puchalski says, “from an analytical standpoint, this is a terrible time due to COVID.” But Puchalski, who already has another Masterpiece Framing store in suburban Bloomingdale, says he had a “gut instinct to go with my heart. I wanted to give it a shot,” he says.

The directors of both the Main-Dempster and Central Street marketing organizations say it is easier to fill small, vacant stores than to find tenants for large ones, such as the former Gap, Panera, and Barnes and Noble stores downtown. (The Barnes and Noble site has been taken by Northwestern Medicine, but the two other large storefronts remain empty).

Plus, downtown has in some ways been hit harder by the pandemic, because many employees who used to work in offices are now working from home, reducing the number of customers for places like Subway, which closed its downtown store.

Neighborhood business districts, on the other hand, rely more on people who live nearby. “They don’t rely on commuters, and are more of a family area,” says Gotsick.

And with lower rents than the downtown core, neighborhood districts are more affordable for those who start a business at home, then rent a small shop “when they’re ready to make the next move,” says Brown.

Both Masterpiece and Beat Street are filling needs which have been in their communities before, which also helps. Masterpiece not only took over Good’s location, but also acquired the framing inventory. Owner Puchalski says he is keeping the old, because Good’s was a “staple in the community,” while also expanding and modernizing the offerings with digital imaging and photo restoration.

“The thing I like about Evanston,” he says, “is the clientele here has an appreciation for small business and for art.”

Windsor, at Beat Street, also says her store is “colorful and artistic.” She says she “decided the children of Evanston need something fun.” Windsor purchased the inventory of the now-closed Oliver’s Toys a few blocks away.

Windsor received a $60,000 loan from the Small Business Administration to bring Beat Street to Central Street. The loan has to be repaid.

Windsor has a one-year lease. “I can afford to try a year here,” she says. She’s hoping the pandemic will ease sooner rather than later. “Once things make a bit of a comeback,” she says, “I’ll be in a good spot.”

While small neighborhood businesses may be more nimble and adjustable to change than are major corporate stores, they also have a tighter operating margin and no financial support from the home office. They are the home office.

Main-Dempster’s Gotsick says “make no mistake … with no stimulus, every single business remains on a knife’s edge.” Those with rainy day funds, she says, are seeing those funds dry up.

Now more than ever, she says, neighborhood districts require people to shop local, particularly during the holiday season. “We are so thankful for our neighbors who are so supportive,” she adds. “We hope they can hang in there with us a little longer.”