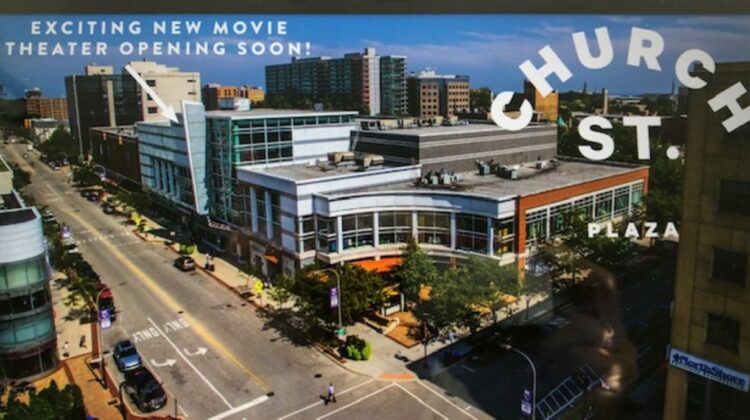 An image from a leasing brochure for Church Street Plaza.

The developer who is buying the large and partially vacant Church Street Plaza complex says he is “very encouraged and bullish” about the nearly 200,000 square foot complex.

The latest empty storefront there is Urban Outfitters, which closed last week after its lease ran out. The currently-shut Cinemark movie theater, closed since the COVID pandemic hit, is another big, empty footprint.

Those two vacant properties make up about half of the Plaza’s square footage.

However, Mitch Goltz, of the purchaser, Chicago-based GW Properties, tells Evanston Now he is optimistic about filling the three-building site at Church and Maple over the next six-to-12 months.

“We have interest in every single space,” Goltz says. Church Street Plaza, he adds, is “poised for success.”

The last 18 months, Goltz notes, turned business “upside down” because of the coronavirus pandemic. And while there is currently a COVID resurgence due to the delta variant, Goltz says of downtown that “the fundamentals are sound in one of the best markets in Chicagoland.”

Urban Outfitters is the latest casualty of changes in shopper behavior. Other large, recent downtown Evanston closures of national chain stores include The Gap, Panera Bread and Barnes and Noble.

Paul Zalmezak, Evanston’s economic development manager, says the ongoing shift to e-commerce, accelerated by the COVID pandemic, created a “retail apocalypse,” where for some businesses, large brick and mortar stores did not make economic sense.

Downtown Evanston was particularly hard hit, because when Northwestern went to remote learning during the pandemic, the students were gone and not spending money in stores.

Zalmezak says the move to e-commerce is “part of the national cycle, and we have to figure out how to adjust.”

GW Properties says a revamped and reconfigured Church Street Plaza will be part of that adjustment, with a mix of stores that will attract in-person customers.

The movies are expected to reopen under a new theater owner early next year, according to Brendan Reedy, leasing agent for CBRE, who is handling Church Street Plaza properties.

The current 18-screen cinema would become a 12-screen theater, with the rest of the property, above Urban Outfitters, available for conversion to an entertainment or recreation facility.

Reedy says modifying that part of the movie theater will create a “dynamic space,” with 50 foot ceilings and lots of windows.

He says there are also five-to-six letters of intent from different types of tenants for first floor locations, including quick service restaurants and “really unique” service and/or entertainment concepts.

“We plan to return the asset to its former glory,” Reedy says. “Or even better.”

GW Properties plans to close on the purchase very soon. Says Goltz, “if we weren’t bullish on the market we wouldn’t be taking on this project.”