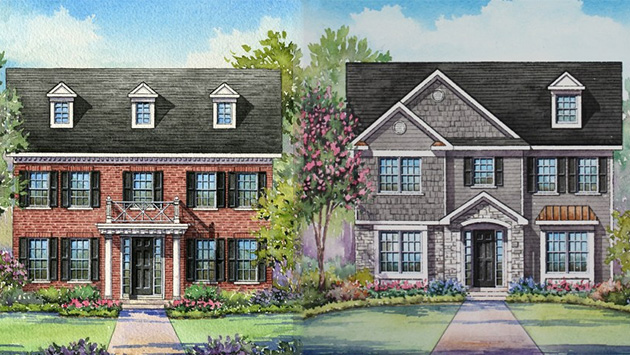 Representatives of the new developer of the former Kendall College site told Evanston Preservation Commission members Tuesday that they plan to build out the 19 lots on the block one home at a time.

Tony Meyers, vice president of North Shore Builders, and Tony Wynsma, regional land manager for the firm's parent company, William Ryan Homes, said they plan to start with a speculative or model home on one of the 45-foot wide lots.

Then, as additional homes are sold, they'll bring each one through the Preservation Commission's approval process individually. 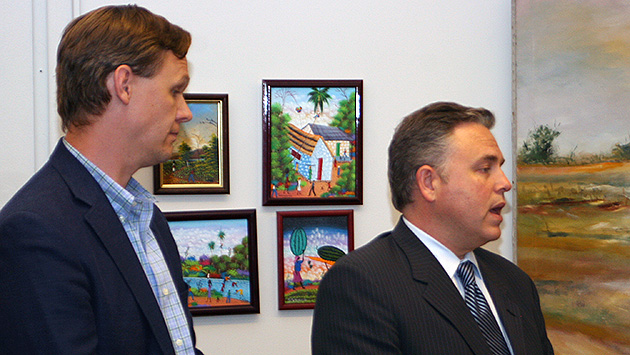 Top: Images from the North Shore Builders website of designs for two homes they're now building in Winnetka. Above: Tony Meyers and Nate Wynsma.

The developers said they plan to have five different floor plans, with a lot of the design elements dictated by the size of the lots.

The four corner houses will be very similar, with the two street-facing sides both made to appear as if they could be the front of the building.

The exteriors of the homes will each have some variation in design details, but most are Colonial, flat-fronted designs with front porches, they said.

"We're used to squeezing in homes onto 50-foot lots, Meyers said, "and there are only so many ways you can make it work. But you can make the homes look different with shutters and windows and front porches."

"We won't have exactly the same house on any of the streets," he added, "I don't think the neighbors want that either."

In phone interview with Evanston Now this morning, Meyers said pricing for the new homes hasn't been set, but likely would start at around $1.2 million. Homes the company has listed on its website in other North Shore communities range from $1.2 million to $2.4 million, and start at more than 3,000 square feet.

The now-vacant site in northeast Evanston is bounded by Sherman and Orrington avenues and Colfax and Lincoln streets.

Meyers said the 14 lots facing Colfax and Lincoln are all 45-feet wide by 165-feet deep. The five facing Orrington are 70-feet wide by 160-feet deep, to closely match the width of lots on other nearby blocks of Orrington.

"What's encouraging is that thee guys looked at the Northeast Evanston Historic District nomination documents and are working to make the new homes fit seamlessly into the neighborhood," Fiske said.

"There'll be no Hardieboard, no Dryvit," she said. "They'll be using real cedar and real wood windows. That's very encouraging to me."

Fiske said the price-points for the new homes "will be a good match to the neighborhood" and said that from an economic development point of view it's "the right developer and the right designs for the city."

The developers hope to submit the plans for the first home on the Kendall site for Preservation Commission review at the commission's June 18 meeting.

It's been roughly 10 years since Kendall College announced plans to leave Evanston for a new location in Chicago.