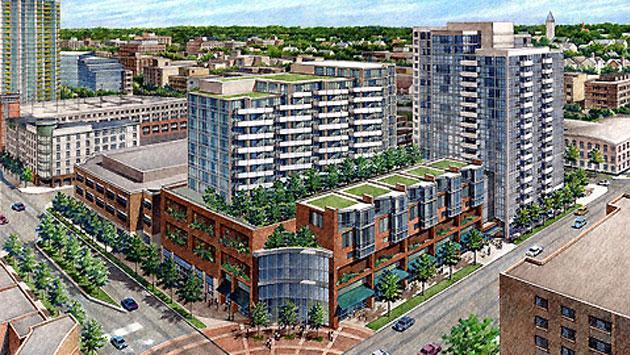 King, in a phone interview this morning with Evanston Now, said that he's switched gears to eliminate the plan for condos in the development and instead build all rental apartments. He added that he also has a new partner in the project.

In the original plan the 1881 Oak building had been envisioned as a condominium development, while the 1890 Maple building was to offer rental apartments.

The Maple and Emerson corner is now occupied by a vacant three-story office building. The Emerson and Oak corner is an empty lot.

King said Carroll Properties hopes to start construction on the project "as soon as we can" because construction costs have continued to go up, despite the recession, and now there's "a very posiive interest rate environment" that may not last.

He said both buildings as now planned may be a little smaller than originally approved — with the Emerson and Oak building perhaps two stories shorter than its approved 18-story height.

Of the projects, initially approved in 2006 and 2007, King said, "Unfortunately we got involved at the top of the market, and there's obviously been a terrible hiatus."

Getting things going again "will be good for the neighborhood and the city" bringing in over $1 million in new taxes for the city and new residents to patronize the downtown commercial district, King added.

Plans to include a Trader Joe's market in the development fell through, and King says the retail component in the project now will be smaller than originally planned. A Trader Joe's is now being developed on Chicago Avenue instead.

Griffin said city staff met with the developers last week and received initial plans for the revised project late in the week. He says it will take another week or two for staff to analyze the proposals and determine exactly what revisions may be required and whether they'll be treated as minor or major under the city's planned development ordinance.

He said the new project plans reduce the proposed height of the 1881 Oak building from 185 to 165 feet and that the new plans for the 1890 Maple site call for a building 13 feet shorter than before.

He says the plans call for a total of 26 more dwelling units than the 342 origiinally proposed for the two buildings. He identified the new development partner on the project as Steve Fifield of  Fifield Companies.

Alderman Peter Braithwaite, whose 2nd Ward includes the project site, was not immediately avalable for comment.

Top: A 2007 rendering of the two proposed buildings and their surroundings, looking southwest from Emerson and Maple.

Earlier stories on the Carroll Properties projects on Emerson