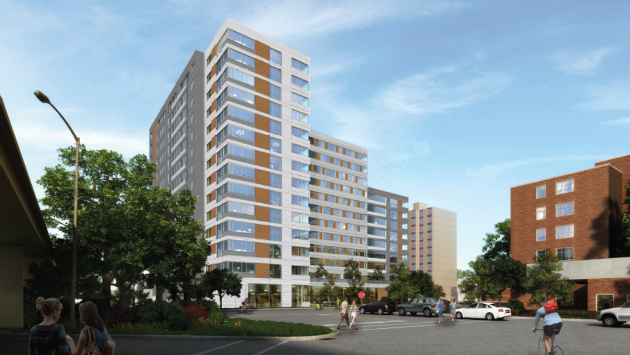 A feasibility report prepared by developers of the planned 831 Emerson St. high-rise in Evanston sees high demand for the new building based on generally high occupany rates at other large, relatively new rental projects in the city located close to transit stations.

However the report, in estimating demand for the student-oriented housing the 831 Emerson developers plan to deliver, makes what appears to be one significant error in its analysis.

The view northeast from the Elgin Road CTA viaduct today in an image from Google Maps.

It asserts that there are over 21,000 Northwestern University students looking for housing in Evanston.

But that number is based on the university's total enrollment — without subtracting the nearly 6,000 students on the Chicago campus, roughly a dozen miles to the south.

That suggests that while the developers estimate they would only need to capture a little under 3 percent of the available demand to fill their planned project, the actual capture ratio needed would be closer to 4.5 percent.

Opponents of the project have cited the university's plan to construct new dorms and require all freshman and sophomore students to live on campus as an indication of declining demand for off-campus housing.

While the university has stressed that its undergraduate enrollment has remained relatively stable for many years, the developer notes that the school's total enrollment — including graduate students — has has increased by 23 percent over the past decade. The enrollment growth on the Evanston campus has been just under 16 percent during that time.

The developers anticipate in their projections that the recent growth in total student enrollment at NU will continue for several years into the future.