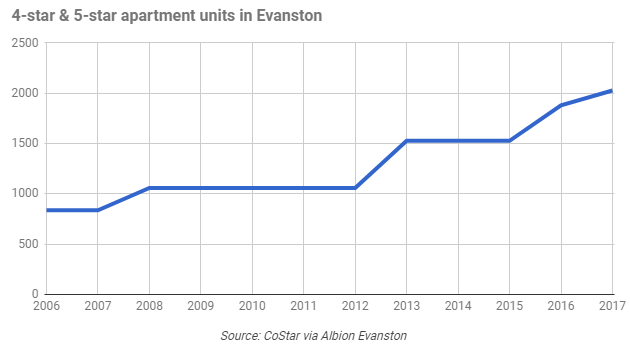 Albion Residential, as part of its planned development application to the city, provided data from the real estate research firm CoStar showing that despite more than doubling the number of premium-quality 4-star and 5-star rental apartment units in Evanston over the past decade, the rental vacancy rate citywide now stands at just 5.5 percent and rents have risen 3.5 percent over the past 12 months.

With most of the new construction happening at the high end, vacancy rates for those properties are higher than the citywide average at 9.9 percent. 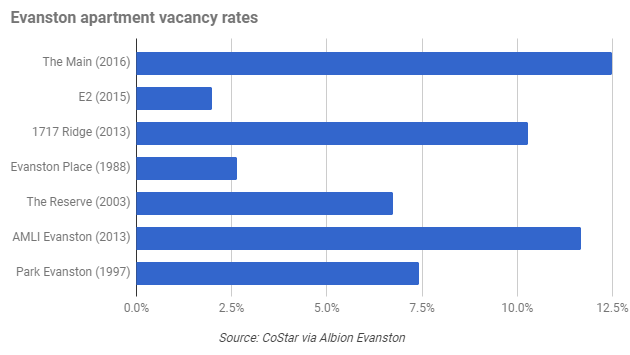 Among the seven high-end properties shown in the chart above that the developers included as being most comparable to their project, the average vacancy rate is just under 6.8 percent.

At the regional level, despite adding about 7,700 rental apartment units in 2017, effective rents in the Chicago area are expected to climb 4.5 percent this year because of an increasing number of jobs and declining home ownership rates. 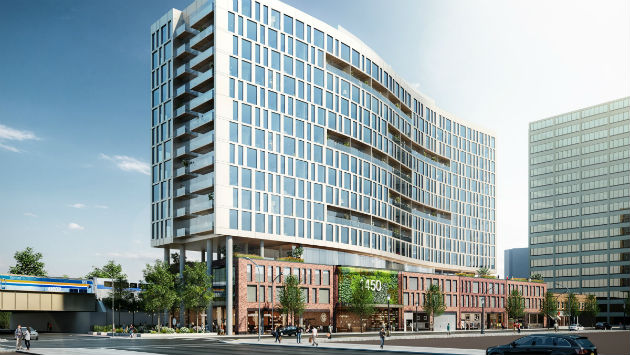 A rendering of the proposed Albion Evanston development at 1450 Sherman Ave.

Developers are also encouraged by the high prices owners are getting when they sell apartment buildings in Evanston — which CoStar says are well above the metro area’s median price per unit.

For the 6,725 rental units tracked by CoStar in Evanston’s 196 largest apartment buildings — about 45 percent of all rental units in the city — rents vary widely by the quality of the property.

The average rent for all rental units in Evanston — including the 55 percent not tracked by CoStar — is $1,200 a month, according to the Census Bureau.

The large new buildings that have added to Evanston’s supply of premium quality rental properties over the past decade, as shown in the chart at the top of this story, are: