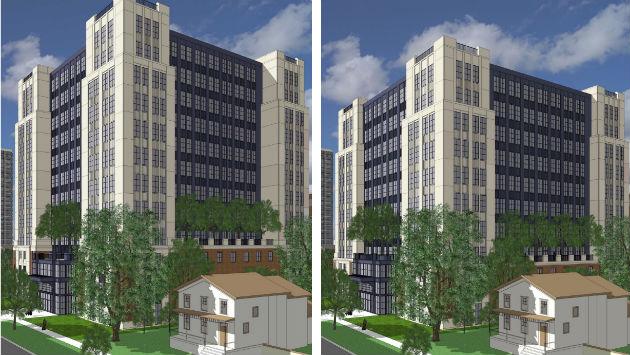 Developers of the proposed office building at 1714 Chicago Ave. unveiled plans for a shrunken version of their tower at the Evanston City Council’s Planning and Development Committee meeting Monday night.

They also reconfigured the parking in the building so that instead of having 28 spaces available full time for public parking, 74 spaces — the same number as in the existing city-owned surface parking lot on the site — would be available.

Under the new plan the developers would lease space in the city’s downtown parking garages — including the Church Street Garage across the street from the site — for tenants of the office building.

The latest version of the proposal matches the provisions of the city’s original request for proposals for the sale of the lot — in the height of the building and the replacement of the surface lot’s existing public parking spaces.

The city will receive $4 million from the sale of the lot and new parking permit revenue. It will also share with other taxing bodies an estimated $1 million a year in property tax revenue from the development

Opponents of the development have submitted a petition opposing a required zoning change that triggers a rule requiring at least three-quarters of the aldermen to approve the change for it to pass.

There was no sign of any additional aldermanic opposition Monday night, although Alderman Peter Braithwaite, 2nd Ward, was absent from the meeting. Braithwaite had voted in favor of the proposal to sell the parking lot when it was introduced nearly a year and a half ago.

Shrinking the height of the development had been suggested two weeks ago by Alderman Judy Fiske, 1st Ward, as a way to respond to some public opposition to the project.

Opponents speaking in public comment had mostly been caught by surprise by the new plans, which weren’t posted on the city website until hours before the meeting. But they generally maintained their opposition to the project.

They also argued that the change in plans was so substantial that it should be sent back to the start of the city’s planned development review process, a suggestion that aldermen rejected as being a waste of time and at variance with how other developments have been handled in the past.