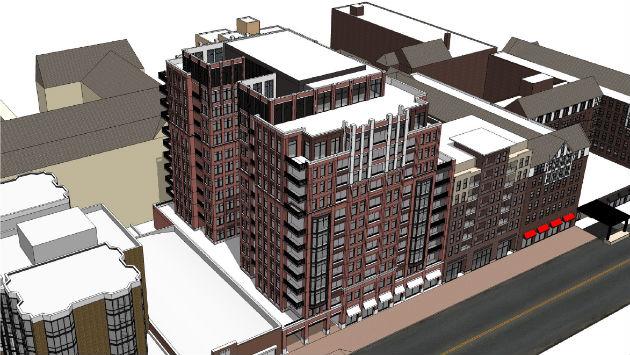 The owners of The Merion retirement community are scheduled to unveil newly revised plans for their proposed new residential development on the adjoining property at 1621-1631 Chicago Ave. in Evanston at a 1st Ward meeting tonight.

The last version of their proposal, shown in June, scaled down the size of the project from 25 to 13 stories.

It also shifted the design motif from a contemporary, mostly glass facade to a more traditional brick design.

A rendering of the 25-story, October 2017 version of the project.

At the June ward meeting, Alderman Judy Fiske. 1st Ward. suggested that the entrance to the building’s parking garage should be moved from the street to the alley.

Aldermen this fall are scheduled to consider revisions to the city’s inclusionary housing ordinance and may take a fresh look more broadly at downtown zoning rules — both of which could impact what’s allowed for the Chicago Avenue development.

Tonight’s meeting is scheduled for 7 p.m. at the Evanston Public Library.

Update 9/5/18: Alderman Fiske announced at Tuesday night’s meeting that the new plans for the project were not yet ready. The presentation is expected to be rescheduled for a future meeting.