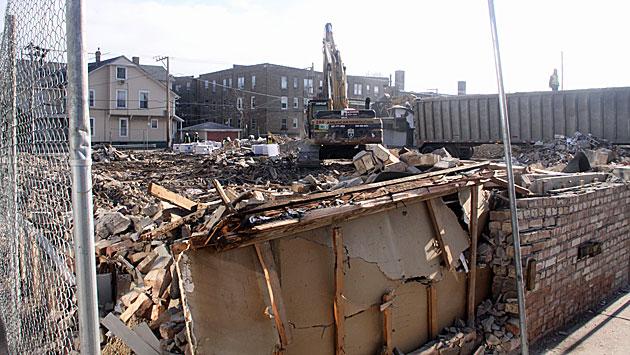 The business of building new buildings in Evanston was showing signs of renewed life as this year drew to a close, after a long slumber caused by the housing market collapse.

AMLI, which initially unveiled plans for a project with 287 units for the site back in early 2008. After scaling down the plans in response to concerns from neighbors, AMLI won city approval for the project later that year, as well as agreement from the city to sell to the developers a city-owned parking lot in the middle of the site.

But though AMLI officials were confident they could break ground quickly, the deteriorating financial market stalled their plans until this spring, when they asked the city for a better price on the parking lot parcel. Then over the summer they won final approval of revised designs for the development. 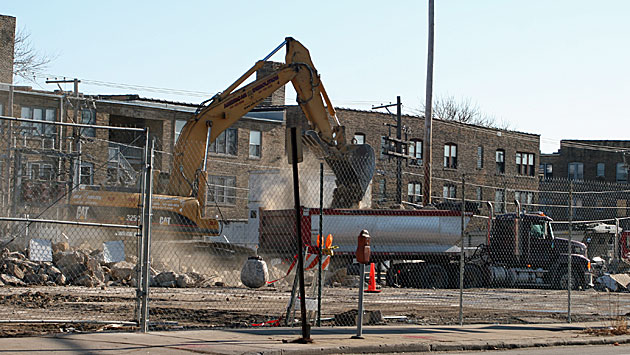 Top and above: Demolition work at the AMLI site (Top photo by Mike Perlman.)

AMLI officials now say they expect that tenants will start moving into the new units by the middle of 2013.

If the magic word for developers before the crash was "condominiums," the word now is "rentals."

At least two big condominium projects that died in the market crash are now showing signs of life as rental projects — although notably ground hasn't been broken for either of them yet.

Focus Development of Northfield, one of the partners in the Sherman Plaza Development downtown, announced plans to fill the empty hole left by the failed Sienna condo development in the 1700 block of Ridge Avenue with a new, 174-unit rental apartment building. 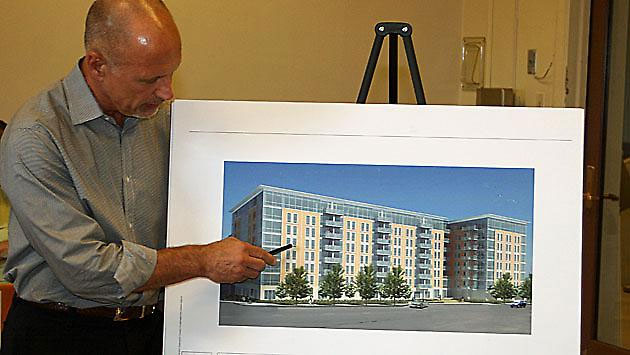 The original Sienna developer, Thomas Roszak filed for bankruptcy in mid-2009. He'd completed only two of four planned condominium buildings on the site when the market collapsed — as did a portion of the development's parking garage roof.

He struggled for a while to come up with alternative plans for the site — including a combination of rental apartments and a hotel, before being forced into the bankruptcy filing.

And in October, the City Council gave final approval to revised plans for The Eastwood, once a 51-unit condominium project, now envisioned as an 80-unit rental apartment complex on the former Evanston Theater site at 1700 Central St. 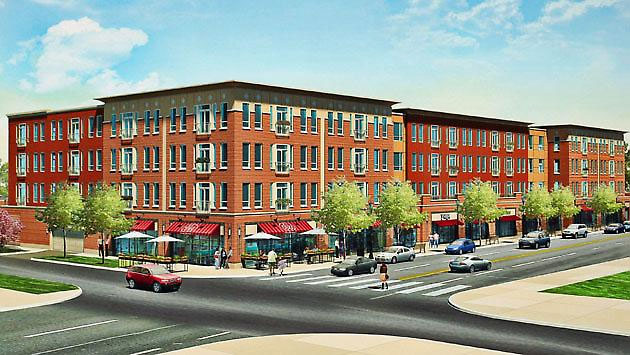 The new design for The Eastwood at 1700 Central St.

The condo project on the theater site had limped along in the early days of the recession, receiving extensions of its planned development approval from the city, but ultimately never breaking ground.

Even assuming the 1700 Central and 1700 Ridge projects do move forward in 2012, that still leaves grass growing on a number of development sites from the boom years, including two on Emerson Street between Oak and Maple avenues on the edge of downtown, the former Kendall College site in northeast Evanston and the lot on the southeast corner of Main Street and Chicago Avenue.

About the only large-scale project that moved forward through the depths of the market collapse has been The Mather, which opened the first of two 10-story retirement communities on the north side of Davis Street at Hinman Avenue in late 2009, and is nearing completion of its second tower on the south side of the street now.