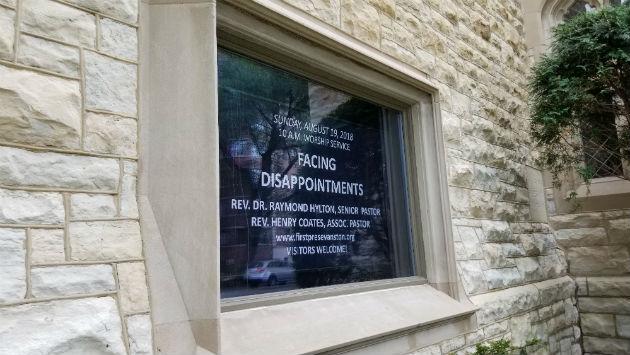 After a rejection by a city staff committee this week, First Presbyterian Church is expected to take its fight to keep its digital display sign to the Evanston City Councl next month.

The dispute offers aldermen an opportunity to seek an update to the city’s sign code that would respond appropriately to changing technology.

The code now sharply restricts what it refers to as “commercial variable message signs,” saying they may only be used to display the time and temperature.

Despite that, the city has granted approval for a variety of digital display signs, ranging from scoreboards at Northwestern University’s Rocky Miller Park to message signs on the Evanston Township High School campus.

And other digital signs have cropped up around town, including this one outside the Whiskey Thief restaurant.

Regulatory schemes developed in other communities, including Bloomington, Minnesota, and Washoe County, Nevada, establish limits on digital sign brightness, measured in nits or candela per square meter, which can be measured with a luminance meter.

Setting appropriate brightness levels would assure that the brightness of digital signs did not make them more distracting than traditional illuminated signs in use throughout the city..

Studies and reports from industry sources and advocacy groups can provide baselines for assessing what  brightness levels should be appropriate for Evanston.

A second message currently displayed on the First Presbyterian sign.

Beyond excessive brightness, the other potential safety risk posed by digital signs is their ability to include full motion video or rapidly changing imagery that may distract drivers.

Other communities have developed formulas for minimum dwell time — the time a single message must remain on the screen — so as to minimize distraction and increase readability.