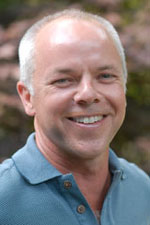 Dinges, who’s candidacy was first reported on Evanston Now Oct. 22, says he’s gathered most of those signatures on his own while talking face-to-face with voters.

"Evanston voters are ready for change, and I intend to represent that change," said Dinges, 49.  "I’ve been energized talking with voters. They love Evanston but they are worried about ever-higher local taxes, city services, and whether they’ll be able to continue to afford to live in what’s the greatest city on the North Shore."

Dinges, who says he pronounces his name DIN-jiss, is a 12-year resident of Evanston. He runs a small issue advocacy consulting firm in town and claims years of expertise in government finance, energy, transportation, public education, crime control, and economic development issues.

"Evanston voters will have a clear choice between the same-old, same-old -– which has gotten us into this budget mess — or a chance for change and new leadership," Dinges said.  "We need new ideas, new energy, and a new focus.  I’m worried about the young families and long-time residents of Evanston who tell me they are not sure how much longer they can afford to live here.  We can’t price them out of our city with non-stop tax increases."

Dinges says city taxes have increased 31 percent since 2002 while the Consumer Price Index during that time increased less than 17 percent.

"Evanston had some prosperous years due to downtown development, but the economy has slowed and city leaders need to listen to residents and businesses, which are really hurting," Dinges said. "City government needs to be disciplined in holding the line on taxes while the economy recovers.  Evanston families are tightening their belts. So should city government."

The main client of The Dinges Gang, his consulting firm, is Invenergy, which is building wind farms throughout Central Illinois.  Over the last three years Invenergy has earned approval to build four wind farms within a two-hour drive of Evanston.  Once constructed these wind farms will produce 1,000 megawatts of electricity, enough renewable energy to serve all the households in Evanston for two years.

"I’d like to bring my knowledge of green technology and business development to bear to help improve Evanston’s quality of life and economic development profile," he said. "I’d like to work closely with the Evanston Chamber of Commerce and Evanston’s many entrepreneurs to create a new model of economic development to grow jobs in Evanston.  I’m a communicator and facilitator.  The next Evanston mayor will need these skills to use the Mayor’s Office, literally, to create an arena for people to work together to address and solve Evanston’s financial and governmental problems."

He says just 592 petition signatures are required to appear on the mayoral election ballot, so he’s confident he will qualify for the race.

More information about his campaign is available on his website.