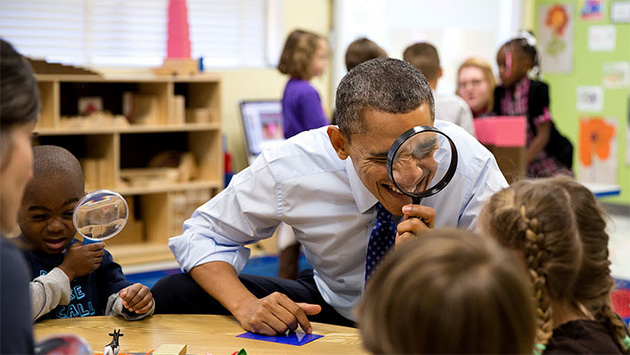 A report co-authored by a Northwestern University researcher finds that outcomes for children participating in “preschool for all” programs are starkly different for children from poor- versus middle- and upper-income families.

In his $75-billion “Preschool for All” initiative, President Barack Obama has called for dramatic increases in the number of 4-year-olds enrolled in quality programs nationwide.

“However, because access to free, high-quality preschool will result in many more-advantaged children switching from private to public preschool, states should carefully consider what tuition levels they set for higher-income families,” Schanzenback says.

If the programs are free, regardless of income, they are likely to divert students away from existing private programs, the researchers argue. 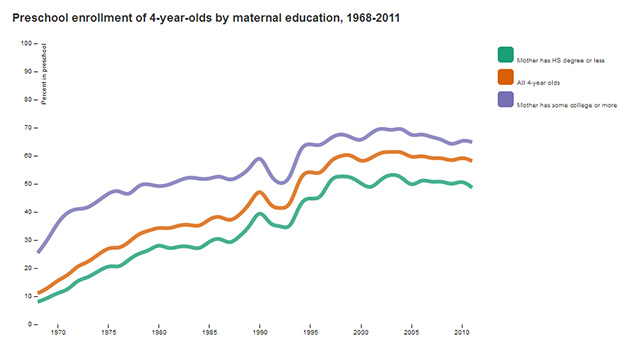 Top: President Obama visiting a Georgia preschool program earlier this year. Above: Kids whose mothers have more education are more likely to be in preschool.

In “The Impacts of Expanding Access to High-Quality Preschool Education,” co-authors Schanzenbach and Dartmouth College economist Elizabeth U. Cascio suggest it may be more cost-effective to design preschool programs that target those most in need while acknowledging that exposure to higher-income peers also plays an important role.

Schanzenbach is associate professor in Northwestern’s School of Education and Social Policy, a faculty fellow of Northwestern’s Institute for Policy Research and a faculty research fellow at the National Bureau of Economic Research.

She has done research on the impact of class size on student outcomes, food stamp benefits, school reform policy and school accountability policies including the Federal No Child Left Behind Act. She is studying the impact of school policies such as school lunch and availability to recess and gym class on child obesity.