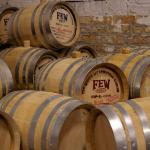 Evanston-based distillery FEW Spirits is seeking a $250,000 loan from the city to pay for new equipment and materials to expand its operation.

The craft distillery, founded in 2010 by Evanston resident Paul Hletko, specializes in production of whiskey, bourbon, rye and gin products.

In part capitalizing on Evanston's history as a center of the prohibition movement, FEW has rapidly expanded its distribution and brings an average of about 75 distillery tourists a week to its tasting room at 918 Chicago Ave., according to a memo from the city's economic development staff supporting the loan request.

Hletko says that despite the high demand for the distillery's products, he's financially constrained to make the capital investment required to expand.

The loan would fund equipment to add another distillery production line and the city would acquire a security interest in the equipment.

The loan agreement, scheduled to be acted on by the City Council Monday night, calls for repayment over 10 years with 6 percent interest.

The city's Economic Development Committee recommended approval of the loan plan last fall on a 6-0 vote.