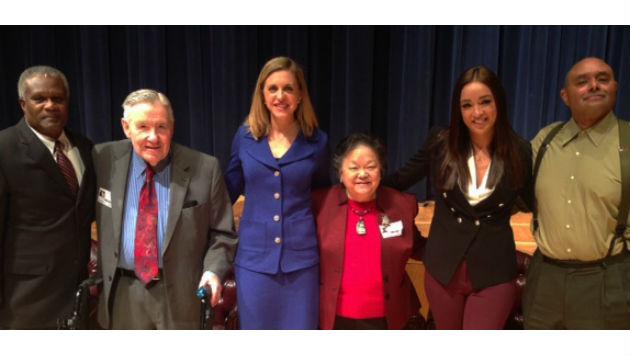 Six Evanston Township High School grads received the school’s distinguished alumni award from the school board Monday evening after spending the day meeting with students at the school.

The award winners were chosing by a selection committee of students, staff, community members and alumni. The program celebrates accomplishments of outstanding graduates to inspire today's students to achievement.

Terry Bowie, Class of 1969, president of Bowie and Associates, a Washington, D.C. firm that provides federal financial management and operations consulting services. As a government employee he previously led financial operations at the Federal Housing Authority, the United States Mint, the Department of Education and NASA and is a past president of the Association of Government Accountants.

Cassidy Hubbarth, Class of 2003, is one of only three women to be the primary solo host of a daily show on ESPN, the sports television network. Now host of NBA Tonight, Hubbarth, a student athlete while at ETHS, remains connected to Evanston as both an alumnae of Northwestern University and as an advisor to aspiring journalists.

Belkis Wu Leong-Hong, Class of 1963, is president of Knowledge Advantage, Inc., a woman-owned small business specializing in delivery of a wide array of expertise on information technology, knowledge management solutions and program management and analysis. Arrivin in the U.S. in 1960 with limited English language skills, Leong-Hong went on to become an active leader in the Asian American and Pacific Islander community on a national level and is a former senior executive in the Department of Defense..

James Macdonell, Class of 1950, is Pastor Emeritus of St. Mark Presbyterian Church in Rockville, Maryland. He worked as a cartoonist and commercial artist before becoming the founding pastor of the church and serving as its leader for over 40 years. A civil rights activist, Macdonnell helped organize the 1963 March on Washington and led a voter registration drive in Canton, Miss.

Donald Michelin, Class of 1969, served as principal of Haven Middle School and works with youth as the coach of the Boys Track and Cross Country team at ETHS. He attended Northwestern University before becoming an. educator and an active member of numerous local organizations.

Maura Corby Sullivan, Class of 1997, is a former Marine Corps Captain and Iraq war veteran who is now assistant to the secretary of defense for public affairs, running communications and public engagement for The Pentagon. A graduate of Harvard Business School and the Harvard Kennedy School, Sullivan has also served as assistant secretary of public and intergovernmental affairs at the Department of Veterans Affairs and as a member of the American Battle Monuments Commission.