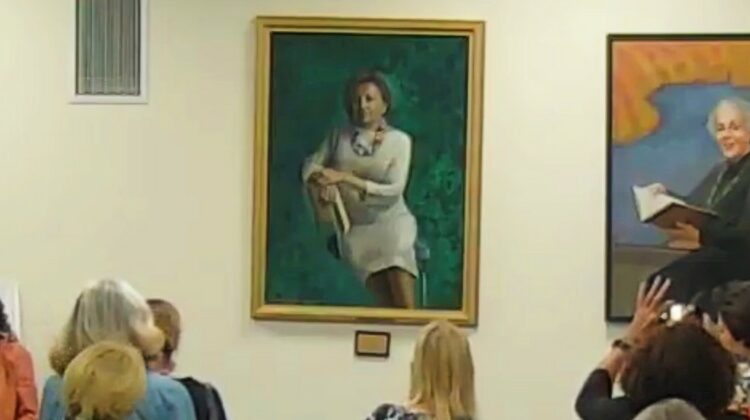 Jane Colleton's portrait now hangs in the ETHS board room.

Since Evanston Township High School was established in the 19th century, only three people have served at least 20 years on the Board of Education.

On Monday night, the current District 202 board honored the most recent member of the twenty-year club by unveiling a portrait which will hang in the boardroom where she served for five terms, ending in 2011.

Jane Colleton, who was on hand for the event, talked of living in Evanston for 50 years, and being an ETHS parent along with membership on the board. She was also a teacher and administrator at Chiaravalle Montessori School.

Seeing the portrait and hearing many compliments left Colleton “pondering that this moment was a little like my own wake.”

However, Colleton said she felt “privileged” to help shape the lives of students from toddler to teenager.

Superintendent Eric Witherspoon praised Colleton for her leadership role in ETHS moving away from “tracking,” where students were placed in certain academic groups which critics felt was racially discriminatory.

Witherspoon is retiring at the end of this school year. Colleton asked the board to consider Witherspoon’s traits when picking a successor.