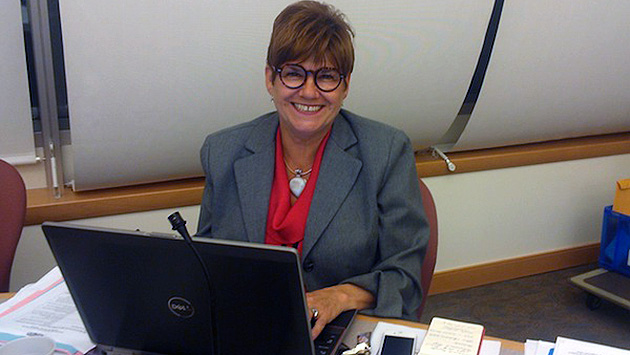 Pat Markham at her desk in the board room for a final time Monday night.

Markham, who also serves as school board secretary, has worked for the district for 25 years. She said she's served four different school departments, five different superintendents and “many, many school boards” during that time.

Markham apparently didn’t want her resignation listed on the board’s agenda Monday night. “I know people are going to be surprised and disappointed they didn’t get to comment,” said board member Katie Bailey.

Bailey teared up as she praised Markham’s efforts over the years, saying she was “incredibly detailoriented,” willing to adapt and “incredibly generous.”

Board President Tracy Quattrocki echoed those sentiments saying “nobody is more nervous about you leaving than I am.”

“I served the families of this community to the best of my ability,” Markham said. “I believe my contributions have helped carry the district forward.”

When asked about her post-retirement plans in an interview after the meeting, Markham said she intends to spend more time with her 13-year-old granddaughter, help her son plan his upcoming wedding and travel with her husband.

Quattrocki said the district has only had some preliminary discussions about filling Markham’s post.