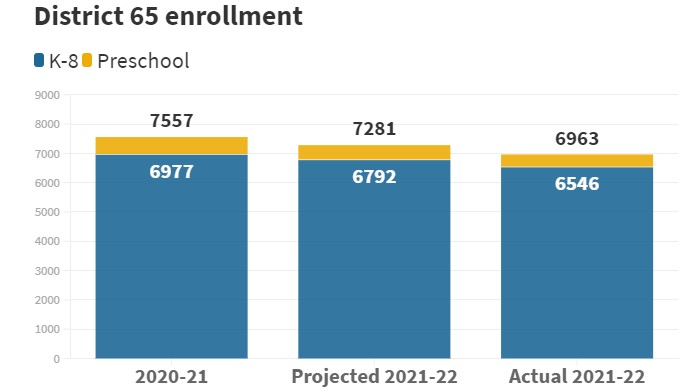 District 65 is shrinking. Not the physical district itself, of course. But rather, the number of students attending the Evanston/Skokie school system continues to decline.

Sarita Smith, the district’s manager of student assignments, told the Board of Education Monday night that for kindergarten through 8th grade, the district had projected 6,792 students for the current academic year. The actual K-8 enrollment, however, is only 6,546, a decrease of 246, or 3.6% from the projection. The actual year-to-year enrollment decline is 6%.

District 65 enrollment has been decreasing for several years. In fact, the actual enrollment for the 2016-17 school year was 7,559 students in K-8, so the decline since then is more than 1,000 children.

There are various demographic reasons for the decline, although District 65 officials say the latest decrease is, at least in part, a result of the COVID-19 pandemic.

Evanston Now has previously reported on parents who opted for private, parochial, or home schooling rather than having their children participate in remote public school learning during the coronavirus-related shutdown.

There are 50 fewer sixth graders than what District 65 had projected so far. After attending a K-5 school, grade 6 (middle school) is a natural transition point where “parents say do you want to go to a different type of school,” Smith noted. “We have definitely seen some 6th graders moving out to the private sector,” she explained.

The projected kindergarten enrollment is seeing an even bigger drop in raw numbers. Eighty-one fewer kindergarteners are attending than expected. Smith said a number of private preschools have added kindergartens this year, so that may be a reason.

However, the picture is not entirely one of losing students. Smith said District 65 has a dozen more first graders than it did last year. “That’s important to note,” she said, “because in first grade we have recouped all the children from kindergarten last year who left.”

There are also more than 50 pending registrations districtwide in various grades, with more possible.

Besides the number of children, Smith said “the big enrollment story is managing three feet of social distancing” which is required as a COVID-mitigation strategy.

The hope is to get those children back to their home schools as soon as possible.

“I have gone from school to school literally with measuring sticks,” Smith said, to see if there is room in a class, and, if so “do we need to order more desks?”

District 65 also has an early childhood/preschool program, as well as two special education/therapeutic schools. Those schools are all below last year’s total of 489 enrollees, but Smith said there is a large applicant pool which could push this year above that.

Adding K-8 numbers with those from early childhood and the specialty programs, Smith said by the time new registrations are counted, “I do not think by the end of this year we’ll be far from” the combined projection of 7,281.

But even that will still be a 2.5% decrease from last year’s combined total.

And if your head is spinning from all the numbers, here’s another. Without social distancing, District 65 has a capacity of 8,945 students, much more space than the district needs for the declining number of enrollees.

With the school board hoping to build a new school in the 5th Ward, that will add even more capacity, which could mean some existing school or schools will have to close.

No decisions have yet been made, as the district continues to study student attendance zones and building age, condition and location.