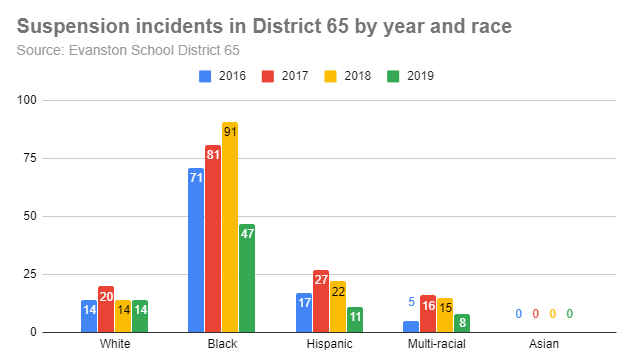 Disciplinary incidents, including suspensions, have decreased for all groups of students according to a report to be presented to the Evanston District 65 School Board tonight.

The number of suspension incidents has decreased to 81 in the school year that ended in June from 142 the previous year. The number of students suspended dropped to 62 last year from 115 the prevoius year, according to a staff report.

The number of lost instruction days from suspensions also decreased — to 140 from 244.5.

The number of suspension incidents involving black students has decreased by 48%, from 91 to 47, and involving students with Individual Education Plans has gone done from 46 to 65.

However last year 59 percent on the suspension incidents involved black students, down only slightly from 64 percent the previous year. Blacks represent 23 percent of the students in the district.

Last year the district implemented a new discipline policy that calls for the use of restorative practices to create “positive learning environments” and support students and teachers. The number of Office Discipline Referrals for major infractions also decreased last year for all students. The district’s discipline philosophy is found in the student handbook.

The school board meets at 7 p.m. at the Joseph E. Hill Education Center at 1500 McDaniel Ave.