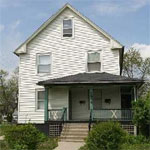 Evanston police say officers responding to a disturbance call near the intersection of Emerson Street and Darrow Avenue about 7:30 p.m. Thursday spotted a man with a gun.

Police Cmdr. Jay Parrott says the officers chased the suspect and another man to a home at 1914 Darrow Ave. Inside the home, Parrott says, they recovered a loaded 9mm handgun.

Now facing a felony charge of unlawful use of a weapon is Andre R. Seals, 30, of 1914 Darrow Ave. He's due in Skokie district court at 9 a.m. on May 22. No charges were filed against the second man.