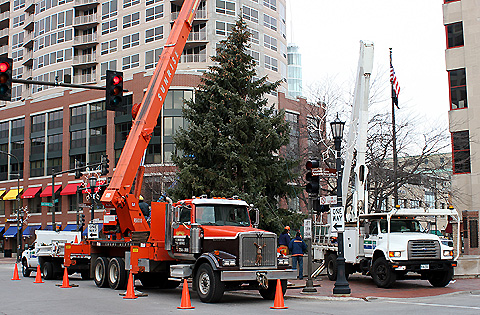 City crews were at work this morning reinstalling the holiday tree in Fountain Square that toppled over in high winds yesterday morning, two days after it was first put in place.

City Parks Director Doug Gaynor says yesterday's 40-mile-an-hour wind gusts turned out to be a little too much for the 50-foot tree. No injuries were reported. Parks and Forestry Superintendent Paul D'Agostino said the wind pulled a capstone off one of the columns at the square that are used to anchor pipes and cables that brace the tree. With its support system weakened, the tree then blew over about 10:30 Thursday morning. Mr. Gaynor said crews cut about 10 feet from the height of the tree and thinned its branches some so they'd be less likely to catch the wind before they put it back up. Mr. D'Agostino added that the crews also fastened the cables higher up in the tree to reduce the amount it could sway. "I've been here 20 years," Mr. D'Agostino said, and it's never fallen over before in that time. But he says long-time employees told him the Fountain Square tree has toppled over at least once in the past. He also noted that this is the first year for the holiday tree display since completion of the Sherman Plaza high rise. "We don't know for sure, but it's possible that the new building has changed wind conditions in the square," he said. The tree mostly fell across the plaza rather than out into the street, so there was little disruption of traffic. "It affected pedestrians more than cars," Mr. D'Agostino said. The lights had been installed on the tree before the collapse, and Mr. D'Agostino says that they were damaged somewhat by the fall and by the efforts to shorten and thin the tree. "We'll have to get the contractor out later today or Monday to fix that, he added. But the tree should still be ready for its moment of glory at the holiday tree lighting ceremony at 5:30 p.m. on Tuesday, Nov. 21. The city gets its tree each year from a local resident who agrees to donate a tree that's overgrown their yard in return for having the city remove it for free. Mr. D'Agostino said this year's tree came from the home of Tony and Julie Bordo, who live at 2405 Payne St.