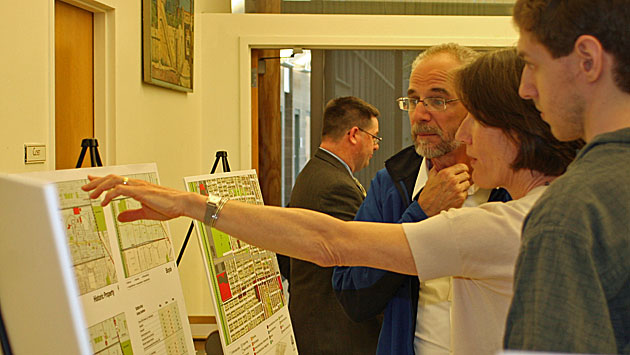 Most speakers at a community meeting Thursday night about a possible new Evanston stop for the CTA Yellow line said they favor Dodge over Ridge or Asbury avenues as the location.

The meeting was the first of three public sessions planned as part of an engineering feasiblity study being conducted by the city that's largely funded through a federal grant.

Stations at all three location opened in 1925 as part of the Niles Center Line of the Chicago Rapid Transit Company, sharing the track with the North Shore Line interurban system.

After the Chicago Transit Authority took over the rapid transit lines, it ended the Niles Center service in 1948 because of low ridership, only to bring it back as the "Skokie Swift" in the 1960s — but the intermediate stations were not reopened and they were eventually torn down. 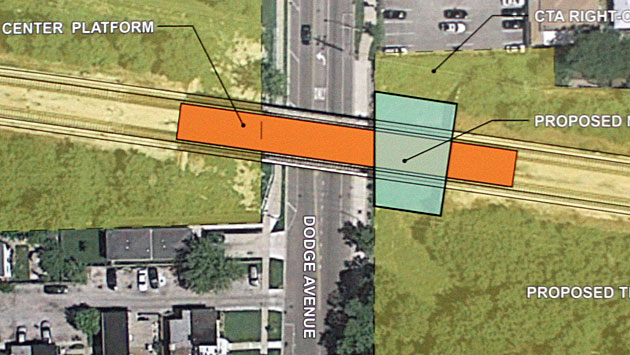 Top: Residents discuss proposals for a new station with city planner Susan Guderly. Above: A conceptual layout for a possible new station at Dodge Avenue, with the station house on the east side of the intersection and a center platform. City consultants said the center platform design would reduce the number of elevators and other facilities needed at a station, but it would require moving the tracks further apart and expanding the steel viaducts over the street.

City officials at the Thursday meeting stressed that even though a new station has already been discussed for years, it's still a long and uncertain path to building one.

But Evanston officials have been encouraged by Skokie's success in getting funding to bring back an Oakton Street stop on the line in their community.

"That was a long process for them with a lot of heartache," said City Engineer Paul Schneider, "but they've now broken ground for it."

The current $275,000 feasibility study is 80 percent funded by a federal Congestion Mitigatin and Air Quality grant made through the Chicago Metropolitan Agency for Planning, with the rest of the money coming from the city's budget.

It's intended to come up with a recommendation for a preferred station location.

No funding is currently available for the rest of the process — environmental reviews, preliminary and final engineering studies or construction.

But Schneider said CMAP is currently developing a five year funding plan for future work, and Evanston hopes to be in position to qualify for further funding as part of that process.

Most of the residents who expressed a preference for a station site at the meeting said Dodge Avenue would be best because it is least served by rapid transit now.

But a few speakers living closer to Asbury or Ridge suggested that getting to the Purple line at South Boulevard or the Red Line at Howard Street wasn't as easy for them as their more westerly-living neighbors thought.

The Yellow Line is 1.5 miles from the Howard station at Dodge Avenue, 1 mile at Asbury and 0.7 miles at Ridge.

Residential density, however, tends to be higher to the east — with more apartment buildings and fewer single family homes.

The city is conducting an online survey starting today about the new station proposal at a special website set up for the project, evanstonyellowlinestation.org.