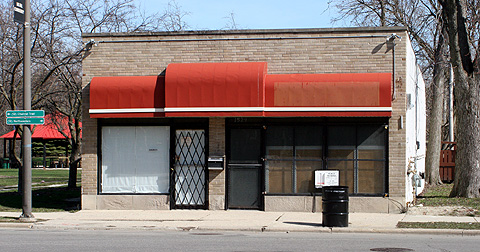 Three west side residents showed up to protest Tuesday night as the Evanston Zoning Committee considered whether to rezone a vacant storefront on Simpson Street so it can be used as an artist’s studio.

The building, which city officials say has been vacant for at least seven years, was rezoned from business to residential use to match the rest of the block some years ago.

The residents, Carlis Sutton, Tina Paden and Betty Ester, said the change now would amount to spot zoning and set a bad precedent for the neighborhood.

Under a previous owner the property accumulated several property standards violations and a building at the rear of the lot was declared a dangerous structure and demolished in 2004.

The building sits at Simpson’s T-intersection with Dodge Avenue. Twiggs Park borders the property to the west.

Zoning Administrator Bill Dunkley noted that Simpson is dotted with small neighborhood commercial buildings, most of which have B-1 business zoning.

He said this building sits on a very narrow lot and it would be extremely difficult under the zoning code to build a house on it, given current setback rules.

The building’s new owner, Peter Fleps of 2151 Forestview Road, said he plans to use the building as a design studio and wood shop for his business, Flepspace LLC.

He said he would use some paint and varnish to complete furniture prototypes, but no more than a person would typically have in a private garage.

“I don’t like the fumes” from painting, he said, adding that he has no plans for a spray booth or other devices that might exhaust fumes into the neighborhood.

Fleps, who volunteers as a coach for Junior Wildkits Football, drew support from another coach, Craig Thompson of 2149 Dewey Ave.

Thompson, a long-time city resident, said the building has been an eyesore and has been going to waste.

“I don’t have any objection to [the rezoning] at all,” Thompson said, “I’d like to see it work.”

Zoning Committee members at the meeting seemed inclined to grant the rezoning request, though somewhat reluctantly.

They postponed a final vote until their next meeting at 6 p.m. on Wednesday, May 14. As with other rezoning requests, the ultimate decision on the issue rests with the City Council.