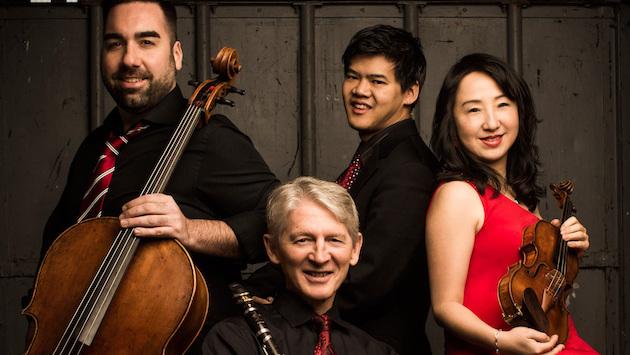 “We live in a complex world with a lot of problems, obviously,” said Lawrie Bloom, Civitas Ensemble clarinetist, “and people are looking for a connection. Chamber music gives connection on a very deep level with everyone in the room. That’s a wonderful experience in today’s world.”

Bloom, like other musicians interviewed by Evanston Now, spoke of music as a medium that can portray emotion clearly to audience members, without the in-between of text. The Civitas Ensemble — down one member due to injury —  played their season finale concert Sunday at the Merit School of Music, with a repertoire that showcased the accessible, fun side of chamber music.

One piece of the concert, an early Beethoven work, emphasized the fun of musical references by expanding on another composer's idea. "The genesis of this piece was from an opera by a today unknown composer that was incredibly popular at the time. Beethoven took the theme from one of those arias — the text is, “Before I work, I must have something to eat” — and created a set of variations. It’s a hoot, it’s 'street music.'"

“Muczinsky says the same thing, that he was trying to write something that was fun to play and fun to listen to. It wasn’t trying to get all deep and angsty. I like to get deep and angsty with the best of them, but sometimes [chamber music is] just fun.”

In putting together their season finale concert without the performance of their violinist, Civitas reached back into their repertoire for inspiration. “We first believe in a lot of variety,” said Bloom. “We like to mix it up with things the audience knows and doesn’t know. It’s a great way to introduce a piece that’s complex, by surrounding it with things easy to listen to.”

“I don’t think new music is different from old music,” said Bloom. “Composers are trying to show an emotional response to what’s around in the world. And we aren’t in Mozart’s world anymore, so we can’t expect the same response. Explanation helps the audience to relax and listen. We always try to talk about a piece before we play it if it’s a bit — craggy.”

“Craggy” chamber music is part of the stigma of music both new and classical, that there’s something impenetrable about certain works, or that there’s “something to get”. Sometimes, “what’s to get” is a question of what the audience gets from the performer.

“I think the basic challenge for all of us as performers is how to look at dots on a page and communicate human emotion to your audience, so that it’s not just dots on a page,” said Bloom. “I was looking up something about the Muczinsky piece and discovered there were two connections I personally felt to it. These aren’t esoteric connections, but they were the way they connected for me.” The celebration of those connections is Civitas’ mission, of sorts.

“In chamber music, the audience is much more aware of how much they are a part of it. At the orchestra, you hear this glorious gigantic sound, but it’s much harder for an audience to feel connected to what they’re witnessing. That’s easier in a much smaller room with a smaller group.”

“Music is an art of communication, and chamber music is the most intimate form of that,” said Bloom. “Audiences react constantly that they love watching, they see the communication going on while we’re playing.”

For information on upcoming Civitas events, visit their website.
If you’re curious, Civitas will be presenting the repertoire previously planned for the season finale — with the violinist — next season.