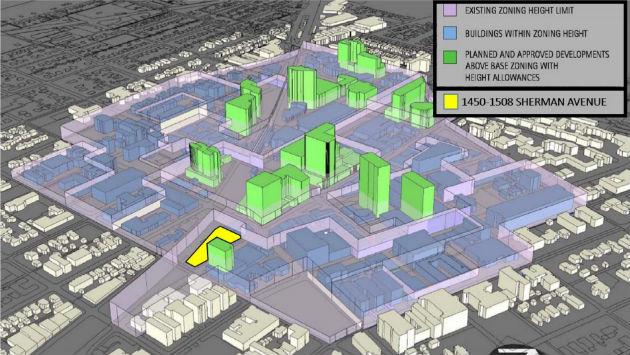 Local government agencies will extract roughly $230 million dollars in property taxes from property owners in Evanston this year. While those taxes keep going up, new development may play a role in slowing the increase.

Property tax discussions can get excruciatingly complex. So to try to keep it simple, we took a look at where $1 million dollars in taxes from a big new development downtown would go.

This chart, created from tax rate data provided by the Cook County Clerk’s office, assumes that the property is in the downtown special service area taxing district, which raises the total City of Evanston tax a bit, but that it’s not in a tax increment financing district, which would capture some of the money that otherwise would go to schools and other taxing bodies.

Those conditions match the status of the proposed Albion Residential development now under review by the city — in the SSA, but not in a TIF.

Then we looked at the property taxes paid this year by three existing large downtown rental developments — E2 at 1890 Maple Ave. and 1881 Oak Ave., The Park Evanston at 1630 Chicago Ave. and The Reserve at 1930 Ridge Ave.

The developers of the Albion project, perhaps because of the smaller average unit sizes in their development, are estimating they’ll pay somewhat less — about $3,300 in taxes per unit — or a total of about $945,000 a year.

How much does new development cut my tax bill?

Well, the simple answer would be that a new development that has to pay $1 million annually in property taxes reduces everybody else’s property tax bill by 0.43 percent. So if your tax bill is $10,000 now, you’d save $43 a year.

You’ll probably never see an actual reduction — because the cost of government services keeps going up. But the new development has the potential to slow the rate of increase.

But what about demand for services from the new residents?

That’s where it gets really complicated — because of questions around excess capacity in the provision of government services.

City officials have estimated that the new Albion development can be adequately served by the city’s existing infrastructure.

A study prepared by SB Friedman, a consultant for the developers, says the Albion project will most likely house only 14 school-age children — meaning Districts 65 and 202 would only have to use about 40 percent of the new money they would get from the project to provide services to those students.

And, looking in the other direction, if development doesn’t happen, and the city’s population declines — as it would have but for the development Evanston has seen over the past two decades — that doesn’t mean the cost of providing services would necessarily decline. It’s that excess capacity problem again.

Then there are the ancillary benefits to having more people downtown — more customers for local retailers trying to stay alive in a tough retail climate — more property tax revenue from those retailers’ landlords who have occupied rather than vacant storefronts.

We’ll keep looking for more precise answers — but that will have to wait for another day.