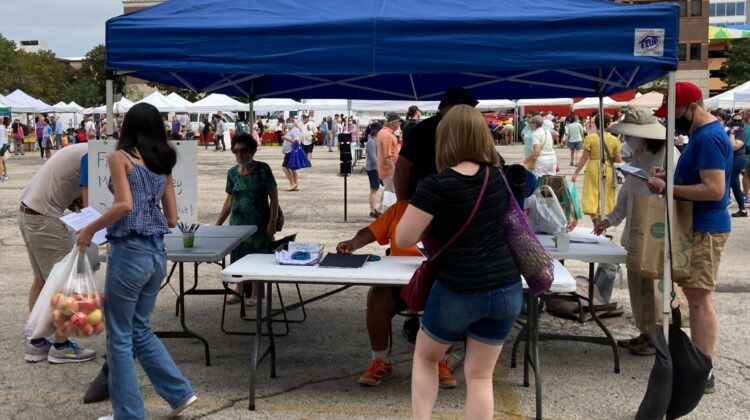 Shoppers being asked to take a market survey.

The downtown Farmers Market has been an Evanston tradition for 46 years. Currently located on a parking lot next to the Maple Avenue garage, the city is considering relocating the Saturday market to Fountain Square.

So the non-profit Friends of Evanston Farmers Markets was surveying shoppers about the idea.

An informal sampling of customers by Evanston Now found a less than enthusiastic response to the potential shift.

Olympia Pollack has been a market shopper for 40 years.

“I like it here” at the Maple Avenue site, she says. “There’s more parking” than you would find at the square, and “it’s more accessible to everyone.”

(Fountain Square is less than a block from the Sherman Plaza parking garage, the city’s largest, while the current fair site is adjacent to the Maple Avenue garage. None of the city garages operate at close to capacity on Saturdays. Fountain Square is a few hundred feet closer than the current market site to the CTA’s Davis Street Purple Line stop.)

The Friends of Evanston Farmers Markets has previously surveyed merchants.

Jeff Morlock, a produce vendor, has been selling fruits and vegetables at the market for 38 years.

“It’s not broke,” he told Evanston Now about the current location. “It’s worked well for everybody. Most of my customers would like it to remain as is.”

The vendor survey did not specifically ask for thumbs up or thumbs down on Fountain Square, but rather quizzed the merchants about needed booth space, access to their vehicles and other site-related issues.

Fifty vendors replied, more than 80% of the total.

Based on those responses, the Friends group concluded, “Our concern is that many vendors would respond to the change [to the Square] by exiting our market rather than adapting.”

Currently, the market is run by the city. The potential shift to Fountain Square would also shift management to the Downtown Evanston business marketing organization.

There is no timetable yet for any decision, although a move, if it happens, would likely not occur until 2023.

There is always the chance that a move might be forced on the city, as the Maple Avenue parking lot is owned by Northwestern University. If the property were developed, the market would have to move.

The Friends group says should that come to pass, other places besides Fountain Square should be studied as well.

But for now, and apparently for as long as possible, vendors and shoppers hope the market stays where it is.