Bike riders heading to downtown Evanston this summer have a new option for where to stow their cycles while shopping or dining downtown — the Sherman Plaza garage.

No congestion at the new Sherman Plaza garage bike racks.

The covered, mostly enclosed bike parking space on the second floor of the new garage can be reached from the pedestrian entrance to the garage at the corner of Davis Street and Benson Avenue. It requires a quick elevator ride, but the garage elevators are big enough to easily accommodate bikes. 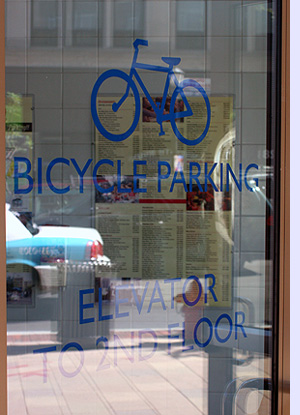 And unlike the parking for cars at the garage, the bike parking is free.

Only two cyclists were using the new racks about 10 a.m. today, while dozens of bikes were chained to decrepit old outdoor racks just across the street outside the Davis Street ‘L’ station.

At the moment if you didn’t already know the bike parking at the garage was there, you’d might never find out about it on a bike ride through downtown.

There’s big blue lettering on the pedestrian entrance door announcing the new service, but with the reflection in the glass, it’s unlikely many people passing on the street will see the sign.

An outdoor rack at Davis Street and Benson Avenue.

At Friday’s Downtown Plan Committee meeting city engineer Rajeev Dahal said the garage racks could hold about a dozen bikes now, but that there’s plenty of room to add more racks if the space turns out to be popular.

The city already offers covered parking for bicycles at the Maple Avenue garage. Mr. Dahal said adding it at the Church Street garage could prove challenging because of the layout of that facility.

Bikes at the Maple Avenue garage.

He said that a survey by the Chicagoland Bike Federation yielded suggestions for over a hundred additional bike racks downtown. He said the city will be looking at additional possible rack locations over the summer.

He said the city staff now prefers to install racks that have the shape of an inverted ‘U’ and are made of square channel steel. They are more expensive than the wave-shaped racks made of circular steel tubing that have become common in recent years, Mr. Dahal said, but they are also more difficult for thieves to cut than the wave racks.

Plan Commissioner David Galloway said he doesn’t like the wave racks and some other designs. “They lack the capacity to hold a lot of bikes and are intuitively confusing as to how to properly fasten a bike to the rack. So people fasten them every-which-way, and it ends up being visually distracting,” Mr. Galloway said. 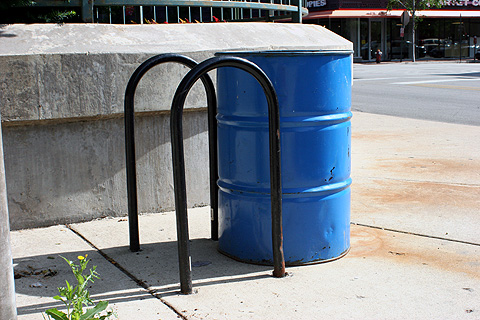 When is a bike rack not a bike rack? When it’s used to corral a garbage can, as is this rack at Benson Avenue and Clark Street.