While city consultants and residents busily sketch out ideas for improving downtown Evanston this summer, the city’s first downtown plan sits on a shelf in the public library — harboring between its covers some of the same ideas people are talking about today. 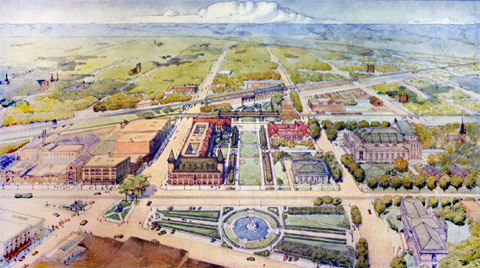 Folks who want to blow away everything on the Fountain Square block and replace it with a park? You’re pikers. Ninty years ago the authors of the Plan of Evanston were talking about that plus ripping down much of what’s now Sherman Plaza and opening up a clear vista from Orrington Avenue to the Metra tracks. 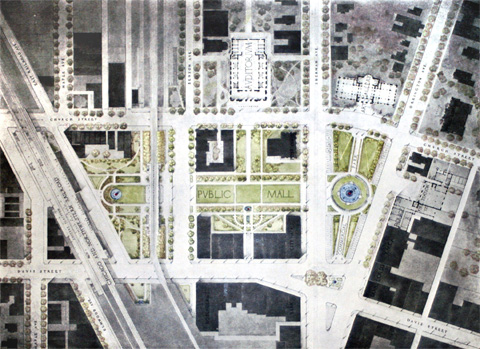 What stood in their way?

Well there was the little matter of money. The planners, who included the namesake son of famous architect Daniel Burnham, estimated their downtown park plan would cost nearly a quarter million bucks, just to acquire the land, back at a time when the assessed value of the whole town was about $12 million.

And — does this sound familiar? Back then the Fountain Square block was owned by Northwestern University. The planners thought it would be a swell gesture if the university would just deed the land over to the city.

"It is just as important for this great educational institution to have a dignified entrance to Evanston as it is to the residents of the city," said the planners, turning on the charm. The gift, they said, "would confer an everlasting benefit on the entire city."

The university, which had left the north end of the block open for what was then called Commercial Park, apparently didn’t take too well to the plan, because by a decade or so later the park had been turned into the 708 Church St. building — now the proposed site for a 49-story condo tower. 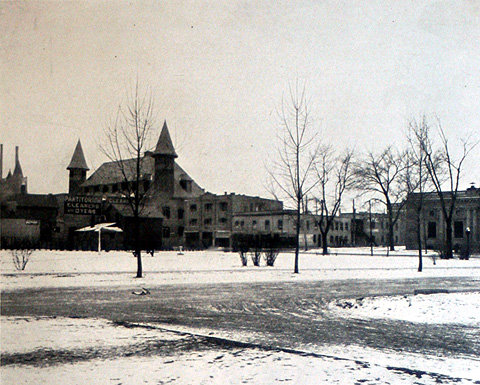 A circa 1917 view southeast across Commercial Park with the twin towers of city hall in the background and part of the post office visible at right.

By the way, the Bureau of Labor Statistics says that $250,000 in 1917 is the equivalent of a little over $4 million today — about what public records say the mortgage is on the Fountain Square Building that today’s planners would like to see torn down to expand the Fountain Square plaza.

Of course you can’t be a reformer unless you decry the way things are today.

In 1917 the planners described downtown as "mean, inadequate, and utterly unworthy a city of the size and importance of Evanston."

While they didn’t complain about wind tunnel effects, they were already worried about parking.

They suggested that around the entire boundary of the new park on the Fountain Square block "would be a parking space for automobiles, large enough to hold all of the cars which now encumber Davis Street, thereby giving to Evanston the unique distinction of having solved the problem of parking automobiles in a business district."

Some sketches for the new downtown plan talk about creating a performing arts center.

Well, they were thinking big about that in 1917 as well.

The city’s first plan calls for an auditorium on what was then the site of Haven School and later became the Marshall Fields store.

And they proposed an art museum on the block now dominated by the Hotel Orrington.

If the 1917 planners had gotten their way, perhaps three quarters of the land in the eight blocks or so that they thought of as the city’s core would have been devoted to tax-exempt activities. (The old Carnegie public library was already on the site of Evanston’s current library, and the planners penciled in fire and police stations on Orrington across from their monumental fountain and just north of what was then the YMCA.)

While the City Council eventually adopted the plan in 1919, little of what the planners called for was ever implemented.

The planners looked beyond downtown, and they did score at least one victory. Their call for a roadway along the North Shore Channel to relieve traffic congestion became the McCormick Boulevard we use today.

The cost of planning

Back in 1917 the planners — all citizen volunteers — said they’d spent "several hundred dollars," all donated by local residents, to put together their plan.

If the costs totalled $500, that would be just over $8,000 in 2007 dollars or about 3 percent of what the city’s consultants are earning for this year’s study.