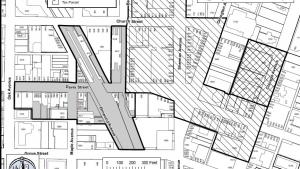 The commmittee recommended that City Council spend about $30,000 in consulting fees to determine whether to expand the Washington National TIF to include land on either side of Davis Street from Benson Avenue west to Oak Avenue.

While city staff presented a map showing one version of what new territory might be included, Alderman Judy Fiske, 1st Ward suggested making it even larger, to include more parcels north of Davis, including ones near the corner of Church Street and Oak.

The staff proposal also suggests removing properties along Chicago Avenue south of Church Street from the TIF — on the basis that the Whole Foods and Park Evanston developments there are unlikely to need any future development assistance from the city.

Assistant City Manager Marty Lyons noted that the Washington National TIF now has a balance of about $5 million available for use on new projects, and that despite the TIF paying about $3.5 million a year in debt service for the Sherman Avenue parking garage, that balance is expected to increase to about $15 million by the time the TIF is scheduled to expire late in this decade.

A developer currently is seeking funding for a proposed music theater on the south side of Davis just east of Oak and city officials have been looking for years at the possibility of redeveloping other parcels in that general area on the west side of downtown.