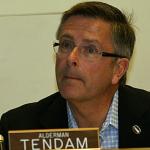 Evanston Alderman Mark Tendam says he sees a lot of support developing for the idea of a new theater complex downtown that he proposed at a City Council meeting less than two weeks ago.

Tendam says he expects that three theater organizations will issue a news release Monday saying they back the concept.

Two of the groups are Piven Theatre Workshop and Next Theatre, both now housed at the city's Noyes Cultural Arts Center.

He declined to name the third group ahead of the planned Monday announcement, but it is known that Northlight Theatre, which got its start in Evanston but is now housed in Skokie, has spoken with city officials about a possible move back to town.

Tendam says he's spoken with a variety of political leaders, including U.S. Rep. Jan Schakowsky about the project and also has gotten an enthusiastic response from the Evanston Community Foundation and Downtown Evanston.

Tendam offered the downtown theater concept as an alternative to a proposal that Piven, prompted by city staff, had developed for it to greatly expand its space at Noyes.

That plan, which critics saw as being financially unfavorable to the city and other current tenants at Noyes, is still on the council's agenda for a vote Monday night.

But Tendam says that because of an oversight in providing formal public notice of the proposed new lease it couldn't be voted on at earliest until the council's Aug. 12 meeting.

He added that in light of the new developments, he hopes Piven will put its plan for Noyes on hold.

The city has recently seen two different studies that looked at expanding arts offerings in town, the evanstARTs project with funding from the community foundation and a downtown arts study funded by a National Endowment for the Arts grant.

But neither study offered any clear strategy for funding a new downtown theater.

Funding still remains the big stumbling block to the new project — but Tendam said he is optimistic some combination of government grants, local donors and possible private investors can be found to make the project a reality.

He said he sees the city serving as a catalyst for the project, but not being the major funder or the ultimate owner of the property.

He said each of the theater companies involved wants to have its own stage in the proposed building, but that it could have a shared lobby and other amentities, possibly including rental space for a restaurant that could generate additional revenue.

He said it wasn't yet clear whether the project would require an exemption from city property taxes.

The alderman said no specific location has been identified for the project yet. He said he believes that a location west of the tracks, perhaps along Davis Street, would ideally match with city efforts to stimulate new development there, but that it could also end up elsewhere in the downtown area.