It’s time for Evanston to bar the door to major new downtown development, some speakers at Tuesday’s Plan Commission hearing on the draft downtown plan suggested.

"If we let everybody live here who wants to live here, then nobody will want to live here any more," Jeff Smith of 2724 Harrison St. said.

Smith, who heads the Central Street Neighbors Association, suggested a landlocked community like Evanston has already achieved its optimal population.

Despite rapidly increasing property values over the past decade of downtown growth, Smith said he "has a hard time getting my head around" the draft plan’s suggestion that downtown could accommodate up to 2,000 new housing units over the next decade without depressing housing prices.

But Smith, an attorney who has his office in downtown Evanston, said he favors the plan’s call for form-based zoning and the general concept of dividing the downtown into three different zoning categories with different height limits. The district boundaries, he said, "by-and-large seem sensible." 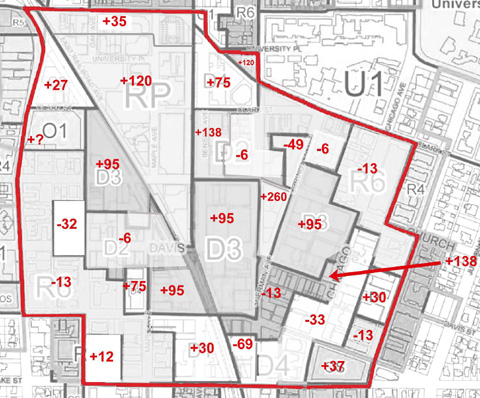 A downtown map, annotated by Jeff Smith to show changes in feet in base zoning heights allowed under the proposed new downtown zoning assuming 12-feet per story. Since existing zoning permits essentially unlimited height bonuses for planned developments and the new proposal would sharply cap bonuses, the actual difference in outcomes is difficult to assess.

"We shouldn’t be acting like an underdeveloped nation desperately seeking foreign investment," he said.

Sanchez, a political science professor at Loyola University, said, "If most residents are against the plan, but it’s still approved, then its patently undemocratic."

Despite a summer-long string of public meetings leading to the plan’s development, Sanchez insisted there has not been sufficient public input and said the plan should be put on hold "until the public policy process is carried out properly."

Vito Brugliera of 1304 Wesley Ave. noted the plan’s call for requiring "green" design for new buildings, and said the most ecologically-friendly and greenest approach is to not build new, but reuse existing buildings.

Plan Commission members disagreed over how rigid to make conditions for giving developers height bonuses under the plan.

Commissioner Coleen Burrus said the benefits need to be more clearly defined and that most features — like affordable housing and day care programs — should be provided at the new development site.

Commissioner Johanna Nyden suggested developers might give cash contributions toward benefits that might vanish within a few years.

But Commissioner Charles Staley said the plan needs to retain flexibility and provide for a spectrum of possible benefits from new development while making sure that "some evil person doesn’t do something with it that we didn’t intend."

The commission will continue its hearing on the downtown plan, taking up what’s expected to be the contentious issue of height limits in the downtown core, at 7 p.m. on Tuesday, Nov. 27.