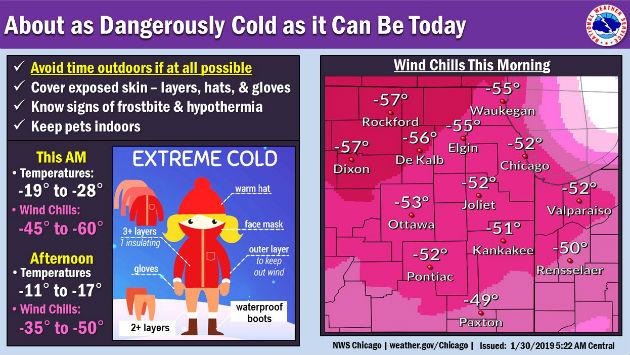 A few dozen Evanston households are faced with power outages at this hour as extreme cold grips the city.

Evanston police this morning did well-being checks on residents in the 2300 and 2400 blocks of Bradley Place after a power failure hit that area — potentially leaving many residents without heat.

That outage, which hit about 4 a.m., also affects some nearby homes on McDaniel, Fowler and Pitner avenues — for a total of 41 households.

ComEd says the outage was caused by damaged power lines, and the utility hopes to have power restored by around 1 p.m. today.

Another 21 customers reportedly are affected by an outage affecting some properties in the 900 block of Noyes and 2200 block of Maple. Power there has been off since 7 a.m. But police doing well-being checks shortly after 9 a.m. said power seemed to have already been restored to most of those customers.

Evanston firefighters are reporting substantial water damage from a burst pipe on an upper floor of the Optima Views condominium tower at 1720 Maple Ave. They’re still on the scene trying to limit the damage from the problem, which was reported about 9 a.m.

There are no major issues to report, he says. at city facilities. Staff continues to monitor all facilities and address issues as they occur.

The Fire Department received 13 calls for service overnight, including a minor greenhouse fire at Home Depot.

Transportation networks are operating with expected residual delays. The elevator at the CTA Davis station is currently out of service.

And if you were expecting some important mail today — you won’t be getting it at least until tomorrow. The Evanston post office has suspended deliveries today because of the cold. For many residents today’s delivery was scheduled to include their new property tax bill.

Update 12:30 p.m.: Connections for the Homeless has opened its shelter, Hilda’s Place, at 1458 Chicago Ave., 24-hours-a-day through noon on Friday. And the organization’s administrative offices at 2121 Dewey Ave. will be open as a warming center from 7 a.m.  to 7 p.m. today, Thursday and Friday.

Rob Strom of Prairie Moon says on the restaurant’s Facebook page, “If you see a friend in need on the streets of Evanston today who needs refuge from this bitter cold, please send them our way. Soup, bread and coffee will be available to those of us who aren’t fortunate enough to have a warm place to go.”